DALLAS (AP) — A Texas salon owner who defied Republican Gov. Greg Abbott’s emergency orders and was jailed for keeping her business open walked out free Thursday to cheering supporters after the governor weakened his enforcement of coronavirus safeguards and a court ordered her released. 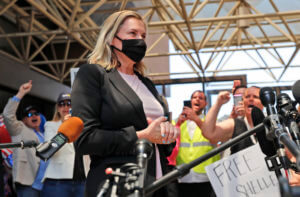 Salon owner Shelley Luther begins to speak to the media after she was released from jail in Dallas, Thursday, May 7, 2020. Luther was jailed for refusing to keep her business closed amid concerns of the spread of COVID-19. (AP Photo/LM Otero)

Shelley Luther, owner of a Salon A La Mode in Dallas, wore a mask while leaving jail less than 48 hours after a judge sentenced her to a week behind bars for flouting public health orders meant to slow the spread of the coronavirus. Her punishment had become a rallying cry for Republican lawmakers and conservative activists who have railed against lockdown measures in Texas, even as the state reopens at a speed faster than many others in the U.S.

Luther, who refused to apologize or promise to keep her business closed even after a Dallas judge said dong so might keep her out of jail, said she was overwhelmed as she walked toward a crowd chanting her name. In April, Luther tore up a cease-and-desist letter in front of TV cameras at an “Open Texas” rally in the Dallas suburbs.

“I just want to thank all of you who I just barely met, and now you’re all my friends,” Luther said after leaving jail. “This would have been nothing without you. Thank you so, so much.” 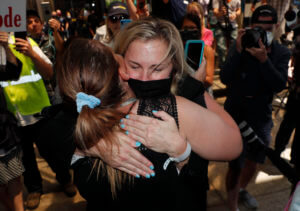 Salon owner Shelley Luther hugs a supporter after she was released from jail in Dallas, Thursday, May 7, 2020. Luther was jailed for refusing to keep her business closed amid concerns of the spread of COVID-19. (AP Photo/LM Otero)

Her release came hours after Abbott rushed to her defense by removing jail as a punishment for defying virus safeguards, thereby removing the toughest penalty. His new order did not mention removing other penalties, including fines, but the relaxed rules reflects the increasing pressure Abbott is under to more quickly reboot the Texas economy, even though he has already allowed restaurants and retailers to start letting customers back inside — a step many other governors have been reluctant to take.

Abbott made the announcement in a statement just before meeting with President Donald Trump at the White House to discuss the response to the pandemic. That statement also mentioned two women along the Texas border, Ana Isabel Castro-Garcia and Brenda Stephanie Mata, who the Laredo Morning Times reports were similarly jailed and released the same day for violating restrictions on nonessential businesses. Their arrests, however, have not drawn as much attention or inspired protests.

“We should not be taking these people and put them behind bars, these people who have spent their life building up a business,” Abbott told reporters in the Oval Office. When Trump asked if that included the beauty salon owner he had read about, Abbott said she was being released.

On Tuesday, Luther refused to apologize for repeatedly flouting the order, leading the judge to find her in contempt of court and sentence her to a week behind bars. But on Thursday, the Texas Supreme Court ordered that Luther be released from jail. 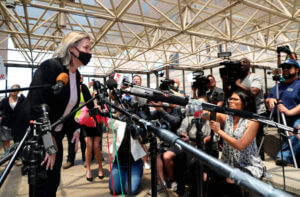 Salon owner Shelley Luther leans in to speak to the media after she was released from jail in Dallas, Thursday, May 7, 2020. Luther was jailed for refusing to keep her business closed amid concerns of the spread of COVID-19. (AP Photo/LM Otero)

Facing protests and open defiance of his orders, Abbott seems to be moving ahead of his earlier timelines to gradually reopen the Texas economy. On Friday, the state will allow all hair salons to resume business, which comes just a week after Abbott suggested that he was aiming toward mid-May. Some have balked at his gradual pace, including two GOP state lawmakers who let reporters shoot video and photos of them getting haircuts outside of Houston this week.

In Houston, where a strip club owner got a court order to stay open, Mayor Sylvester Turner said Thursday the city has tried to follow Abbott’s rules. But Turner, a Democrat, said “once you take the enforcement mechanism out of the order, you really don’t have an order anymore.”

Texas has had more than 35,000 confirmed cases of COVID-19 and more than 970 deaths related to the virus. The number of cases continues to climb in the state, which has averaged more than 1,000 new ones per day in the week since Abbott’s stay-at-home orders ended May 1. But  Abbott has said he is focused on  hospitalization rates that remain steady and infection rates that have dropped since mid-April.

For most people, the new coronavirus causes mild or moderate symptoms, such as fever and cough that clear up in two to three weeks. For some, especially older adults and people with existing health problems, it can cause more severe illness, including pneumonia and death.

Weber reported from Austin. Associated Press reporter Juan A. Lozano in Houston contributed to this report. 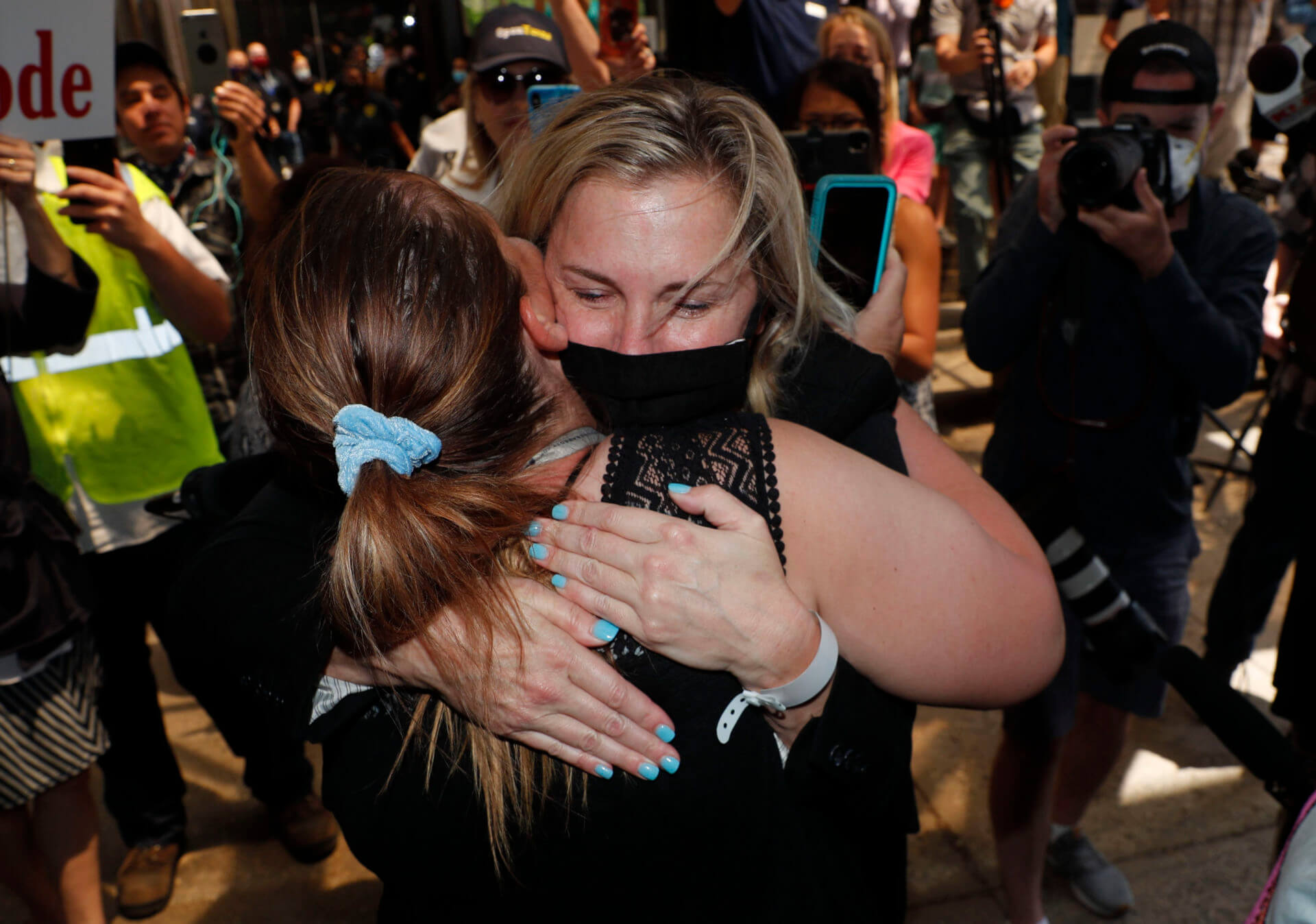 Salon owner Shelley Luther hugs a supporter after she was released from jail in Dallas, Thursday, May 7, 2020. Luther was jailed for refusing to keep her business closed amid concerns of the spread of COVID-19. (AP Photo/LM Otero)
MORE NEWS