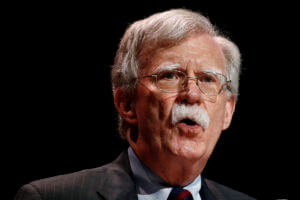 Bolton’s claims in a forthcoming book — that Trump told him he wanted to withhold security aid from Ukraine until it launched investigations into political rival Joe Biden — ramped up pressure on GOP senators to call him to testify.

Trump’s legal team has repeatedly insisted there was no linkage, and Trump tweeted on Monday that he never told Bolton such a thing.

Biden’s son Hunter also came under scrutiny as Trump’s lawyers focused on his high-paying job with a Ukrainian energy company when his father was vice president.

Highlights of Monday’s session and what’s ahead as senators conduct just the third impeachment trial of a president.

A BOLT FROM BOLTON

Bolton’s testimony has been the subject of fierce debate for months, but it leaped to the forefront as news leaked of his claims in a forthcoming book. Bolton writes that Trump told him he wanted to withhold security aid from Ukraine until it helped him with investigations into Biden. Bolton’s written account, first reported by The New York Times, was confirmed to The Associated Press by a person familiar with the manuscript on the condition of anonymity.

Republican Sen. Susan Collins of Maine said the report about Bolton’s book “strengthens the case” for witnesses, while Sen. Mitt Romney, R-Utah, said it’s “increasingly clear that what John Bolton would have to say would be important for those of us asked to render impartial justice.”

Alaska Sen. Lisa Murkowski, a key Republican moderate, said she has long been curious about what Bolton might have to say, adding that “I’m still curious.”

Trump denied Bolton’s claims in tweets early Monday. “I NEVER told John Bolton that the aid to Ukraine was tied to investigations into Democrats, including the Bidens,” Trump wrote. “If John Bolton said this, it was only to sell a book.”

Trump said people could look at rough transcripts of his call with Ukrainian President Volodymyr Zelinskiy to see there was no pressure for such investigations to get the aid. In that July 25 call, Trump asked Zelinskiy to “do us a favor” with the investigations as he was withholding nearly $400 million in military aid to the U.S. ally at war with Russia.

Trump falsely claimed Monday that the Democrat-controlled House “never even asked John Bolton to testify.” Democrats asked Bolton to testify, but he didn’t show up for his deposition. They later declined to subpoena Bolton, as they had others, because he threatened to sue, which could have led to a prolonged court battle. 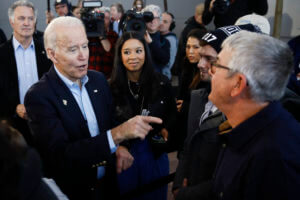 While the news media focused on Bolton, White House lawyers sought to turn scrutiny to Hunter Biden, who served on the board of Burisma, one of Ukraine’s largest natural gas companies.

Former Florida Attorney General Pam Bondi, representing the White House, said Burisma was known to be corrupt and that Hunter Biden served on the board at the same time his father was leading the Obama administration’s anti-corruption efforts in Ukraine. Bondi offered no evidence of wrongdoing by either Biden, but said Democrats had improperly tried to dismiss questions raised by the younger Biden’s role with Burisma.

“Their case crumbles” if there’s something worth investigating about the company and Hunter Biden’s role, she said.

Sen. Patrick Leahy, D-Vt. said Bondi’s complaint about the appearance of a conflict of interest was “as hypocritical as it is irrelevant to the serious evidence before the Senate.”

Joe Biden, campaigning in Iowa, said he saw no reason for him or his son to testify.

“I have nothing to defend,” Biden told reporters. “This is all a game. No one has said I’ve done anything that was wrong, period. … The reason he’s being impeached is because he tried to get a government to smear me and they wouldn’t. Come on.”

The evening livened up when law professor turned Trump lawyer Alan Dershowitz unloaded his bag of dusty law books at the podium to lecture senators on impeachment and how, in his view, a crime was required.

Dershowitz drew wide smiles from Republicans, including Senate Majority Leader Mitch McConnell, and rolling eyes from Democrats. The Harvard Law professor acknowledged his own changed views of impeachment law, and that he voted for Hillary Clinton.

The presentation capped a long day that started with another star-turn attorney, Ken Starr, the prosecutor in Bill Clinton’s impeachment, defending Trump.

When Dershowitz was done, Republican senators lined up to shake his hand, as did a Democrat, West Virginia’s Joe Manchin. One of the House Democratic lawyers, Norm Eisen, a Harvard Law alum, walked over from the prosecutors table and gave the professor a bear hug.

The White House legal team is set to wrap up its case Tuesday. Senators are expected to submit written questions to the prosecution and defense later in the week before a vote on whether to call new witnesses or admit new documents.