WASHINGTON (AP) — Chief Justice John Roberts, in ordering an investigation into an “egregious breach of trust” in the leak of a Supreme Court draft opinion on abortion, tasked a relatively unknown court official to carry out what could be one of the most high-profile investigations in decades.

The marshal of the Supreme Court has now undertaken the investigation to try to identify the source of the leak — a nearly unprecedented breach of protocol that sent shock waves through the Supreme Court and Washington legal community. 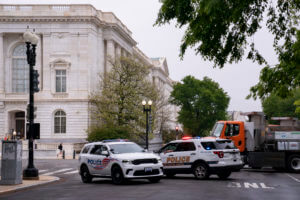 Police vehicles and heavy trucks block access to Supreme Court Building in Washington, Wednesday, May 4, 2022, as security measure are enhanced on the perimeter following protests sparked by news that the court might overturn cases that guarantee abortions. More demonstrations are expected in the wake of a Politico story about Supreme Court Justice Samuel Alito’s draft majority opinion, which sets the stage for the court to overturn Roe v. Wade and Planned Parenthood v. Casey. (AP Photo/J. Scott Applewhite)

“This was a singular and egregious breach of that trust that is an affront to the Court and the community of public servants who work here,” Roberts said in ordering the investigation.

But many questions remain about how the investigation will be carried out and whether a federal crime was committed. Separately, there are questions about what powers the Marshal may use to find the person who leaked the documents.

“To the extent this betrayal of the confidences of the Court was intended to undermine the integrity of our operations, it will not succeed,” Roberts said. “The work of the Court will not be affected in any way.”

Despite the Biden administration’s curtailing the government’s ability to seize records from reporters, the court’s marshal operates outside of that chain of command, opening the possibility for an investigation without traditional guardrails to protect journalists’ sources.

Here’s a look at the investigation and how it could play out.

IS IT A CRIME?

That’s a matter of legal dispute, but many experts say bringing a criminal case would be extremely difficult.

“There is no special statute that makes it a crime to disseminate a draft Supreme Court opinion or other private court documents,” Renato Mariotti, a former federal prosecutor, said in a tweet.

Nevertheless, some lawmakers, particularly Republicans in the Senate, have called for an extensive investigation and prosecution of the person who leaked the document.

Sen. John Kennedy, R-La., demanded the FBI investigate the leak. And Senate Minority Leader Mitch McConnell, R-Ky., called for the Justice Department to “pursue charges if applicable.” He said the “lawless action should be investigated and punished as fully as possible.”

Generally, the Justice Department pursues leak investigations when classified information is unlawfully released to the public, but that isn’t the case here. And while there may be an argument that the release of the draft could amount to the theft of government property, the Justice Department’s guidelines suggest a prosecution would be unlikely.

Federal law prohibits the theft or receiving of stolen government information. But Justice Department guidelines say it is “inappropriate to bring a prosecution” under that law if the person had legitimate access to the information or documents and then used it “for the purpose of disseminating it to the public.”

WHO IS THE MARSHAL DOING THE INVESTIGATION?

The court’s marshal, Col. Gail A. Curley, came to the court from the U.S. Army and has been on the job for less than a year. As marshal, she wears several different hats in overseeing the administrative side of the court. She is the court’s chief security officer, overseeing a staff of approximately 260 employees including the police force that provides security for the justices and the Supreme Court building. But she is also the building’s facilities administrator. And when the court hears arguments it’s her job to bang a gavel and announce the justices’ entrance into the courtroom with a traditional cry that includes the phrase “Oyez! Oyez! Oyez!” which means “hear ye.” 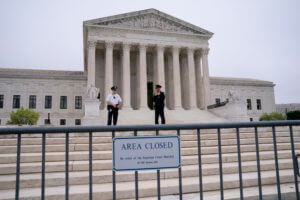 The Supreme Court Building is seen in Washington, early Wednesday, May 4, 2022, as security measure are enhanced on the perimeter following protests sparked by news that the court might overturn cases that guarantee abortions. More demonstrations are expected in the wake of a Politico story about Supreme Court Justice Samuel Alito’s draft majority opinion, which sets the stage for the court to overturn Roe v. Wade and Planned Parenthood v. Casey. (AP Photo/J. Scott Applewhite)

Curley began her job of marshal in the summer of 2021 following the retirement of the court’s longtime Marshal Pamela Talkin. The court said then that while working for the Army, part of Curley’s duties included providing legal advice and support on national security law to senior Army leadership. Her military career included time in Germany and Afghanistan.

Curley graduated from the U.S. Military Academy and has a law degree from the University of Illinois College of Law. She received two different master’s degrees from military schools.

It is very unclear at this point. The marshal could carry out the investigation herself, but she’s perhaps more likely to bring on help.

The group of people that has access to a draft opinion includes the court’s nine justices, a small number of staff and some three dozen law clerks, young lawyers who help the justices with their work for a year. The marshal could theoretically hire an outside law firm to assist in the probe. And in other cases involving judicial records, the FBI has sometimes been called in to help.

A Justice Department spokesman said Tuesday that the department had not been asked to help assist in finding the person who leaked the document.

All law clerks sign a code of conduct promising confidentiality. “The law clerk should take particular care that Court documents not available to the public are not taken from the Court building,” a copy of the code from 1989 says.

An investigation is likely also to focus on how and why the information was leaked, whether it was intentionally provided to Politico by a court employee or inadvertently made available to someone who then sent a copy of the draft to the news organization, or whether a different circumstance occurred.

CAN THE MARSHAL SEIZE THE RECORDS OF THE JOURNALISTS?

Maybe. In most cases, though, investigators need to spell out exactly why they believe a crime was committed in order to obtain the records from the companies who would hold telephone or email records.

The investigation is somewhat unprecedented, and the Supreme Court hasn’t searched for anyone who leaked information on this scale in the digital age.

The Biden administration has significantly curtailed the use of subpoenas and warrants to seize the records of journalists in leak investigations. But the marshal of the Supreme Court doesn’t report to the executive branch of the government, so those restrictions likely wouldn’t apply in this investigation.

In July, Attorney General Merrick Garland formally prohibited prosecutors from seizing journalists’ records as part of leak investigations after an outcry over revelations that the Justice Department — in the Trump administration — had obtained records belonging to journalists at The Washington Post, CNN and The New York Times as part of investigations into who had disclosed government secrets related to the Russia investigation and other national security matters. 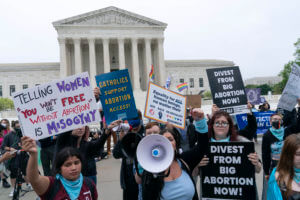 Demonstrators protest outside of the U.S. Supreme Court Tuesday, May 3, 2022 in Washington. A draft opinion suggests the U.S. Supreme Court could be poised to overturn the landmark 1973 Roe v. Wade case that legalized abortion nationwide, according to a Politico report released Monday. Whatever the outcome, the Politico report represents an extremely rare breach of the court’s secretive deliberation process, and on a case of surpassing importance. (AP Photo/Jose Luis Magana)

Garland’s policy — which includes limited exceptions when prosecutors could obtain the records — reversed years of Justice Department policy and aimed to resolve an issue that long vexed prosecutors trying to weigh the media’s First Amendment rights against the government’s desire to protect sensitive and classified information.

The marshal of the Supreme Court, however, reports directly to the court and the chief justice and wouldn’t be subject to those restrictive guidelines. It isn’t clear if the marshal or any others involved in the investigation could issue subpoenas or attempt to collect the records of the Politico journalists or others.

The marshal of the Supreme Court has served a subpoena before, though the one publicly known instance came in 1915 after a dispute where a Civil War soldier took Martha Washington’s will, which was later sold to a wealthy New York banker. The state of Virginia later brought the case to the Supreme Court and the subpoena was issued in an effort to collect the will.

The beginning of the investigation comes during a particularly busy time of year for the court. The justices just finished hearing arguments in cases at the end of April. They spend May and June completing their work on opinions, and those are issued before they take a summer break. They return to the bench to begin hearing new cases in October.