AKRON, Ohio (WEWS) — Questions are surfacing after the Summit County Juvenile Prosecutor’s office dismissed a charge against a 14-year-old boy who had a gun in his backpack at Kenmore-Garfield High School in Akron, Ohio.

Pat Shipe, president of Akron Education Association, called the decision “alarming” and wants to know why it happened. 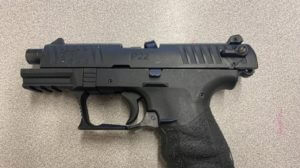 The gun that was found on a student at Kenmore-Garfield High School. (Bob Jones, WEWS)

“To have charges dismissed is just, to me, beyond words. I do not understand it,” Shipe said. “There have to be consequences to actions.”

The incident happened on the morning of October 26, 2021.

According to a police report, the student left a class without permission and he was located in a hallway by an administrator who could smell marijuana on the teen.

The administrator searched the boy’s backpack and found a black .22 caliber handgun in the right side pocket, police said.

A school resource officer was notified and confiscated the gun. The officer also found “a burnt marijuana roach” in the student’s right pants pocket, according to the report.

In a recorded statement, the student told police he didn’t know how the gun got in his backpack or how the marijuana got in his pants, according to the report.

The teen was charged with illegal conveyance or possession of weapons on school premises.

However, on January 18, a juvenile prosecutor requested the charge be dismissed. The charge was officially dropped on January 20, according to a Summit County Juvenile Court official. 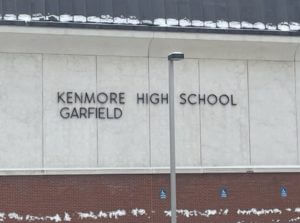 Police said the gun was not loaded, but Shipe said that doesn’t lessen the seriousness of a weapon brought into a school.

“A weapon is a weapon,” she said. “I don’t believe whether the gun is loaded or unloaded, it should not make any difference. We cannot begin to minimize and desensitize the society to students bringing weapons into school buildings,” Shipe said.

Deputy Chief Brian Harding said the Akron Police Department is also trying to get an explanation from prosecutors.

“Bringing a weapon to school is never acceptable. It’s something that we take very seriously. We work in collaboration with our partners at the school and the court system as well for those cases. Absolutely, we feel charges are appropriate in that situation,” Harding said. “I don’t know all the specifics of the decisions made ultimately by the court.”

Since last week, News 5 has made multiple requests for comment from the Summit County Juvenile Prosecutor’s office. A spokesman said a supervising prosecutor was reviewing the case, but no explanation was given for the dismissal.

On the disciplinary side, the high school building administration recommended the student for expulsion, but the hearing officer referred him to an alternative educational setting in a different building for up to one year, according to a district officials.

This story was originally published Jan. 28, 2022, by WEWS in Cleveland, an E.W. Scripps Company.