ALEXANDRIA, Va. (AP) — By May 2014, American hostage Peter Kassig was losing hope that he would survive his captivity at the hands of the Islamic State group.

“Dad, I’m paralyzed here. I’m afraid to fight back. Part of me still has hope. Part of me is sure I’m going to die,” he wrote to his father, Ed Kassig, who read the letter from the witness stand Wednesday at the terrorism trial of British national El Shafee Elsheikh. 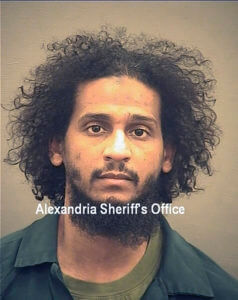 FILE – In this photo provided by the Alexandria Sheriff’s Office is El Shafee Elsheikh who is in custody at the Alexandria Adult Detention Center, Wednesday, Oct. 7, 2020, in Alexandria, Va. Jury selection began Tuesday, March 29, 2022, in the trial of El Shafee Elsheikh, a British national charged with taking a leading role in a scheme by the Islamic State group to take Americans and others as hostages for ransom, resulting in the deaths and beheadings of multiple U.S. citizens. (Alexandria Sheriff’s Office via AP, File)

The testimony left many in the courtroom fighting back tears in what’s so far been a two-week trial that has detailed in gruesome ways the brutality inflicted on more than 20 Western hostages held captive by the Islamic State roughly a decade ago.

Even the judge, T.S. Ellis III, appeared to be fighting back tears as he called an early recess in the proceedings immediately following Kassig’s testimony.

Elsheikh — better known as one of “the Beatles,” a moniker given by the hostages to several of their captors who spoke with distinctive British accents — is accused of taking a leading role in the hostage-taking scheme that resulted in the deaths of four Americans: Kassig, James Foley, Steven Sotloff and Kayla Mueller. Kassig, Foley and Sotloff were beheaded in videos distributed across the world. Mueller was raped by Islamic State leader Abu Bakr al-Baghdadi before she was killed.

Kassig’s long, handwritten letter was delivered to his family by a released hostage. Peter Kassig wrote that his captors tried to tell him and the other hostages that they had been abandoned by their families and their countries for refusing to meet the Islamic State’s demands.

“But of course we know you are doing everything you can and more. Don’t worry Dad, if I do go down I won’t go thinking anything but what I know to be true, that you and Mom love me more than the moon!” Peter Kassig wrote.

He wrote that “if I do die, I figure that at least you and I can take some refuge and comfort in knowing that I went out as a result of trying to alleviate suffering and helping those in need.”

Kassig, an aid worker, was taken hostage in Syria in 2013. He had started his own nonprofit organization to provide medical training and supplies to areas beyond the reach of some of the larger aid groups.

Also Wednesday, the jury heard testimony from an FBI agent who helped plan an effort to rescue hostages in July 2014 that ultimately failed because the hostages had been moved from a desert prison south of Raqqa before the rescue attempt.

And they heard testimony from French hostage Nicolas Henin, who survived 300 days of captivity before his release in 2014. Under questioning from First Assistant U.S. Attorney Raj Parekh, Henin described escaping several days after he was taken hostage, and the torture inflicted on him when he was recaptured.

Henin said he asked his guards for a broom to clean up his cell, and he used the broom to help knock loose the bars covering a window. He crawled through the window in the middle of the night and ran for miles across the Syrian desert until he came to a village near the city of Raqqa, an Islamic State stronghold, where he sought help.

“I met two people in pajamas,” he said. “Unfortunately you can’t recognize an ISIS fighter in their pajamas. They took me to the local police station.”

The authorities returned him to his captors, who beat him, strung him up in the air dangling from handcuffs that dug into his flesh in the Syrian sun, and finally left him in a cell for 11 days with his wrists chained to his ankles.

In his later months of captivity, he came across the Beatles, who were already recognized by his fellow hostages as particularly sadistic. He said the three Beatles would regularly inflict beatings, and that the Beatle they dubbed “Ringo” would frequently lecture the hostages on the justification for their captivity.

“They were trying to explain to us that even though we were not carrying weapons, we were still somehow a kind of fighter in the war between the infidel West and Islam,” Henin said.

Prosecutors have said that Elsheikh is “Ringo,” though none of the hostages who has yet testified has been able to explicitly identify him. Witnesses have said all the Beatles took great pains to keep their faces fully masked when they were in contact with the hostages.

“They liked to consider that as long as they were masked, they were protected from prosecution. This was maybe a stupid idea,” Henin said, grinning broadly in the direction of Elsheikh, who sat just feet from him at the defense table.