RICHMOND, Va. (AP) — A settlement has been reached in a lawsuit twelve women brought last summer against Liberty University, accusing the Christian institution of fostering an unsafe environment on its Virginia campus and mishandling cases of sexual assault and harassment.

A notice of dismissal filed Wednesday by the plaintiffs’ attorney, Jack Larkin, said the case had been settled but provided no details about the terms. 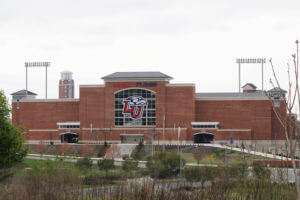 FILE – Liberty University’s football stadium is empty as students were welcomed back to the university’s campus, March 24, 2020, in Lynchburg, Va. A settlement has been reached in a lawsuit twelve women brought last summer against Liberty University, according to court documents filed, Wednesday, May 11, 2022. (AP Photo/Steve Helber, File)

In a statement Thursday, Liberty said a settlement had been reached with all the plaintiffs and all but two additional women Larkin represented. The university did not disclose the terms of the agreement but outlined a number of other changes it has undertaken in recent months to improve campus security and review how it responds to incidents of sexual harassment or violence.

“Liberty University president Jerry Prevo made it clear when the Jane Does filed their lawsuit that, despite certain claims being potentially outside of the statute of limitations, the university was committed to doing what it could to ‘make things right’ with the plaintiffs,” the statement said.

Larkin did not respond to a request for comment from The Associated Press. But he told TV station WDBJ the settlement terms were confidential.

The development comes as the prominent evangelical school in Lynchburg faces continued scrutiny over its handling of sex assault cases. It is facing other lawsuits that raise similar allegations and recently acknowledged to news outlets that the U.S. Department of Education is reviewing its compliance with the federal Clery Act, which requires colleges and universities to maintain and disclose crime statistics and security information.

In a statement, the department acknowledged the oversight work was ongoing but said no further comment would be provided until “the outcome officially has been communicated to the institution.”

The recently settled lawsuit was filed in federal court in New York and made various claims under Title IX, the federal law that protects against sex discrimination in education.

It alleged that Liberty’s strict honor code makes it “difficult or impossible” for students to report sexual violence. It said the university had a “tacit policy” of weighting investigations in favor of accused male students, and it said the university retaliated against women who did make such reports.

The women, former students and employees, all filed suit anonymously and were identified as Jane Doe 1-12. Their allegations spanned more than two decades.

Some plaintiffs in the lawsuit described being raped or sexually harassed and having their cases mishandled or effectively ignored. One woman alleged pregnancy discrimination.

A status report filed in the case in February said that if it was not resolved “amicably” an amended complaint would be filed adding new plaintiffs, including a current student.

In its statement, Liberty said it has spent over $8.5 million on campus security upgrades, including the installation of security cameras, blue light emergency call boxes and enhanced lighting, along with a new cellphone app for emergency reporting. 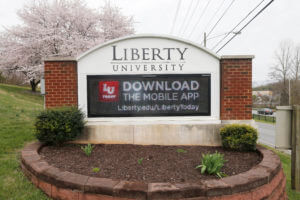 FILE – A sign that marks an entrance to Liberty University, is pictured on March, 24, 2020, as students were welcomed back to the campus during the coronavirus outbreak in Lynchburg, Va. A settlement has been reached in a lawsuit twelve women brought last summer against Liberty University, according to court documents filed, Wednesday, May 11, 2022. (AP Photo/Steve Helber, File)

Liberty said it has made donations to community sexual assault response programs and is reviewing its counseling services to ensure there are more services available from licensed mental health providers, “including in rapid response scenarios resulting from sexual assault.”

The university is also revising its amnesty policy to “better communicate” that it will not discipline parties who engage in behaviors, in connection with a case of sexual harassment or assault “that would have otherwise violated its student honor code.”

Liberty has also been in the spotlight recently for its acrimonious split with former president and chancellor Jerry Falwell Jr. in 2020. Litigation between Falwell and the school is ongoing.