DES MOINES, Iowa (AP) — From the start, the case stemming from a drive-by shooting death of a 15-year-old boy near a Des Moines high school has been among the most complex prosecutions ever in Iowa’s capital city, involving 10 teenagers, six guns and at least 42 fired bullets. 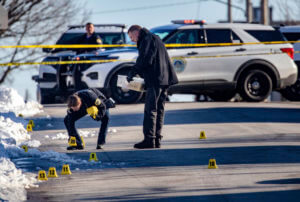 FILE – Police investigate a shooting outside of East High School in in Des Moines, Iowa, on March 7, 2022. From the start, the case stemming from a drive-by shooting death of a 15-year-old boy near a Des Moines high school has been among the most complex prosecutions ever in Iowa’s capital city, involving 10 teenagers, six guns and at least 42 fired bullets. (Zach Boyden-Holmes/The Des Moines Register via AP, File)

Plea agreements from several defendants have simplified things a bit, but as frequent hearings continue with trials likely beginning in March 2023, the cases remain tangled as attorneys try to shift blame over who fired the shots, who planned the killing and who was just along for the ride.

The charges all stem from a sunny but chilly day last March when 10 teens ages 14 to 18 climbed into three cars, armed with at least six guns and drove to a neighborhood near East High School, only a half mile from the Iowa Capitol. The specifics of their plan aren’t clear, but police say the teens were out to settle a grudge and fired on Jose Lopez, his sister, one of her friends and two other teens standing on a sidewalk nearby.

The gunfire hit Lopez, his sister and their friend, killing Lopez and seriously injuring the girls.

Some of those arrested are believed to be involved in gangs, and Des Moines Police Department spokesman Sgt. Paul Parizek said the killing appeared to be another example of shootings among young people that arise from relatively trivial disputes.

“Rather than having a schoolyard fight or just avoiding that person, this is how they handle it,” he said.

Violent crime involving juvenile offenders is increasing nationally, according to U.S. Department of Justice data. The department’s Office of Juvenile Justice and Delinquency Prevention tracks juvenile offenders and said in its most recent statistical briefing book that known juvenile offenders were involved in about 1,122 murders in the U.S. in 2020, representing about 8% of all known murder offenders.

Murders by juveniles acting alone increase by 30% in the preceding year, according to the agency’s 2020 report released in December 2021, the most recent available. Murders involving multiple juvenile offenders increased 65%.

Des Moines police charged the teens with first-degree murder and two counts of attempted murder. Eight of the suspects 16 or older were charged as adults, as required by state law for those accused of a forcible felony. The two younger suspects — 14 and 15 — are being prosecuted through the juvenile court system, and if convicted they likely would stay in state custody only until their 18th birthdays.

Court documents show that one of the adult defendants, Manuel Buezo, 17, pleaded guilty to second-degree murder and two counts of willful injury on Oct. 5. He will be sentenced on May 30, and a plea agreement suggests he’s facing a 20-year prison sentence.

Gumaro Marquez-Jacobo, 18, has agreed to plead guilty to offenses that included being an accessory after the fact and providing a pistol to a person under 21. Though the charges carry penalties of up to four years in prison, court documents said prosecutors have agreed to recommend a suspended sentence and two years of probation. Sentencing is set for May 30. 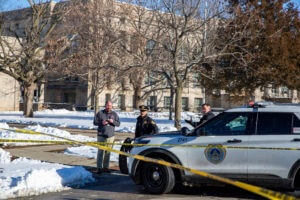 FILE – Police investigate a shooting outside of East High School in in Des Moines, Iowa, on Monday, March 7, 2022. From the start, the case stemming from a drive-by shooting death of a 15-year-old boy near a Des Moines high school has been among the most complex prosecutions ever in Iowa’s capital city, involving 10 teenagers, six guns and at least 42 fired bullets. (Zach Boyden-Holmes/The Des Moines Register via AP, File)

Kevin Martinez, 16, has agreed to plead guilty to two counts of intimidation with a dangerous weapon. He will be sentenced Nov. 21. The crimes carry prison sentences of up to 10 years each.

Henry Valladares Amaya, who turned 18 a few days after the shooting, also may enter a plea. A judge has set a plea hearing for Oct. 14. The charges he’s agreed to plead guilty to are not yet disclosed.

The first trial is planned Oct. 17 for Braulio Hernandez-Salas, 17, but his attorney asked a judge Friday to delay the trial because he is discussing a plea with prosecutors.

On March 6, defendants Octavio Lopez Sanchez, 17, and Daniel Hernandez, 18, are scheduled to be tried together, and Romeo Perdomo, 17, has trial set for April 10.

A document filed by Assistant Polk County Attorney James Hathaway in July said prosecutors have chosen to split up defendants into separate trials “in order to reduce the complexity and logistical difficulties in this case.”

One difficulty in prosecuting multiple defendants in such a shooting is proving whoh had a gun and fired it as the cars drove by. The attorneys for Daniel Hernandez said in a document filed July 1 that Hernandez and Amaya will be pointing the finger at each other. They said the trial will be unusually complex for a jury to sort out who were the shooters, who aided and abetted, and who shares liability for joint criminal conduct.

Rigg, the Drake law school professor, said he can’t recall another case that started out with eight defendants in a single homicide case. Each defendant adds a different set of facts complicating the trial for prosecutors and making it more difficult to keep it all clear in the minds of jurors.

Instructions the judge must read to jurors will be a nightmare, he said, because each defendant faces multiple charges, and many include lower-level offenses jurors could consider.