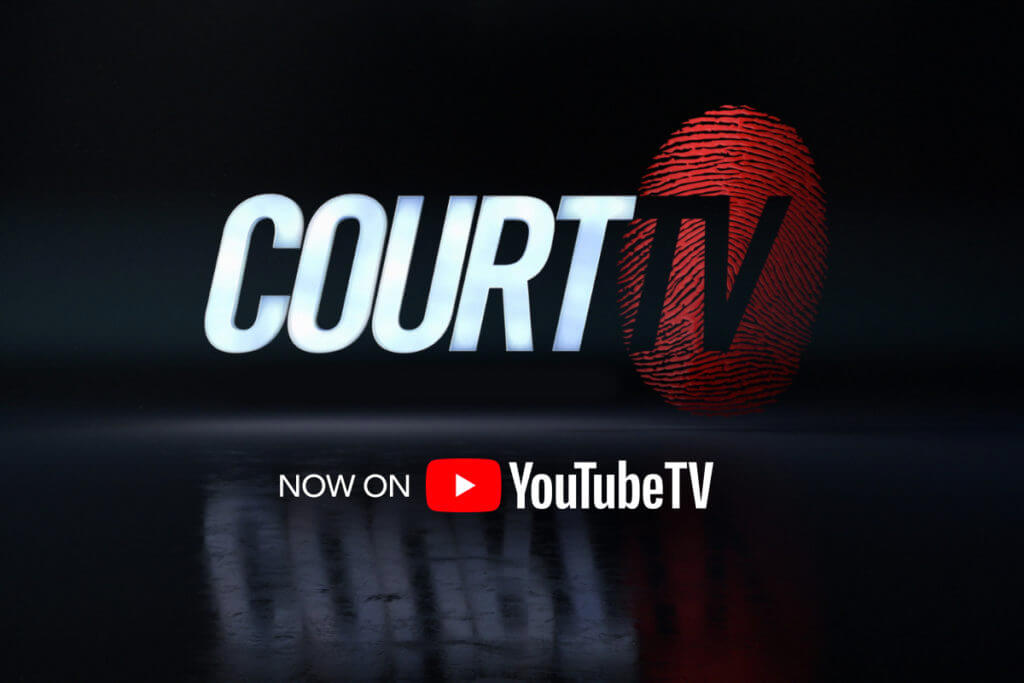 Your Front Row Seat to Justice

Court TV to Launch on SiriusXM on May 15

ATLANTA/NEW YORK (May 14, 2020)  ̶  Court TV, rebooted last May and available on cable, over-the-air and over-the-top, expands to another new platform on May 15, 2020 when it will be launched by SiriusXM, it was announced today. Court TV’s live gavel-to-gavel coverage and analysis of the nation’s most important and compelling trials will be available on channel 793 through the SiriusXM app on... READ MORE

ATLANTA (May 12, 2020) – Court TV – the newly-rebooted, multi-platform network devoted to live, gavel-to-gavel coverage, in-depth legal reporting and expert analysis of the nation’s most important and compelling trials - is now available on YouTube TV. “We’re thrilled to have Court TV added to YouTube TV at a time when consumer appetite for the real-life drama of true-crime... READ MORE

Coverage Begins Mon. May 4 at 10AM ET ATLANTA/WASHINGTON, D.C. (April 30, 2020) -- Court TV will air LIVE audio of the cases being presented in front of the Supreme Court of the United States (SCOTUS) beginning May 4 at 10:00am/ET. This the first time in the history of the country that Americans will be able to listen to real-time... READ MORE

ATLANTA (Aug. 28, 2019) - Court TV is launching a weekly podcast that will dive into the real-life deceptions, betrayals and murders that lead to justice in the courtroom. The Court TV Podcast will be hosted by network anchors Vinnie Politan and Seema Iyer and will debut tomorrow August 29, with new installments available every Thursday. Each podcast will take... READ MORE

LOS ANGELES (JULY 27, 2019) – The new Court TV, which launched across multiple platforms in May, will develop and produce original programming including documentaries and docuseries centered around the real-life drama of true crimes and cases which will draw from the nearly 100,000 hours of footage in the original Court TV library. “Mining the vast Court TV library of... READ MORE

LOS ANGELES (JULY 27, 2019) – Court TV will be the only news organization covering the rape trial of movie mogul Harvey Weinstein live as it happens and gavel-to-gavel when it begins in September. Court TV will be stationed adjacent to the New York City courthouse for the duration of the trial, with live reporting from inside and outside the... READ MORE

LOS ANGELES (July 27, 2019) – Court TV, the newly-rebooted, multi-platform television network devoted to live, gavel-to-gavel coverage, in-depth legal reporting and expert analysis of the nation’s most important and compelling trials, will grow even more when it is launched by top-rated and high-powered television stations in 17 major markets on Oct. 28, 2019: Court TV runs 24 hours a... READ MORE

ATLANTA (May 7, 2019) – A murder trial reminiscent of the Casey Anthony case and the rape trial of a former top NFL player will be the first two trials to air live, gavel-to-gavel on the new Court TV, which launches across multiple platforms on May 8 at 9:00 a.m. ET. In addition, the judge who presided over the Casey... READ MORE

ATLANTA (May 2, 2019) -- Katz Networks (part of The E.W. Scripps Company - NASDAQ: SSP) today announced more distribution agreements across multiple platforms for the new Court TV as the network builds to its launch on Wednesday, May 8 at 9:00 a.m. ET. Cable Court TV has entered into agreements directly with more than a dozen mid-sized cable providers, including GCI Cable; Massillon Cable... READ MORE

ATLANTA (April 15, 2019) -- Katz Networks (part of The E.W. Scripps Company - NASDAQ: SSP) today announced that the new Court TV will premiere across all platforms on Wednesday, May 8 at 9:00 a.m./EDT. The company also revealed the programming schedule for the iconic brand’s unprecedented return and launched the new courttv.com today. The Court TV weekday schedule will kick-off... READ MORE

The new Court TV has added Yodit Tewolde to its growing on-air news team as the network builds to its launch in May. Tewolde fills Court TV’s fourth and final anchor position, joining Vinnie Politan, Seema Iyer and Julie Grant at the network desk. All four are seasoned journalists and lawyers who have successfully blended television and legal careers. With... READ MORE

The new Court TV has added five seasoned journalists, four of whom are lawyers who have successfully have blended television and legal careers, to its growing on-air news team as the network builds to its launch in May: Seema Iyer and Julie Grant will join Vinnie Politan at the Court TV anchor desk, Chanley Painter has been named legal correspondent... READ MORE

(DEC. 10. 2018) -- One of the most iconic brands in television history will return when Katz Networks, part of The E.W. Scripps Company (NASDAQ: SSP), relaunches Court TV – a new network devoted to live, gavel-to-gavel coverage, in-depth legal reporting and expert analysis of the nation’s most important and compelling trials.  For more than 20 years, Court TV brought... READ MORE