LOS ANGELES (AP) — Officials on Wednesday identified the two police officers who were killed in a shootout the day before while investigating a possible stabbing at a suburban Los Angeles motel. The suspect also died at the scene.

The officers were Corporal Michael Paredes and Officer Joseph Santana, the city of El Monte said in a news release posted to social media. They were both raised in the city where they worked. 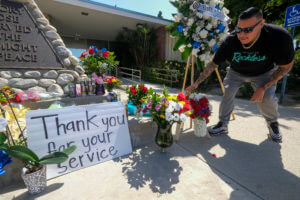 A man places flowers at a memorial Wednesday, June 15, 2022, outside El Monte City Hall for two police officers who were shot and killed Tuesday, at a motel in El Monte, Calif. The two police officers were killed in a shootout while investigating a possible stabbing in the suburban Los Angeles motel, and the suspect died at the scene, authorities said. (AP Photo/Ringo H.W. Chiu)

“Corporal Paredes and Officer Santana paid the ultimate sacrifice,” the release stated, “while in performance of a noble profession, serving the community they loved.”

Mourners on Wednesday left bouquets, wreaths of flowers and candles outside the El Monte police station to honor the fallen officers. Their autopsy examinations are pending. The coroner’s office has not yet released the name of the suspect, pending notification of his family.

Few details have emerged about what occurred during the violence. The officers went to the Siesta Inn in El Monte, east of Los Angeles, around 4:45 p.m. Tuesday, for a welfare check where a woman had possibly been stabbed.

Gunfire erupted inside a motel room and the gunman then fled into the parking lot, where more gunfire was exchanged, Meyer said.

Meyer said he didn’t know whether the officers were shot inside the motel or outside. They died at a hospital. The gunman was shot and died at the scene and a gun was found.

Meyer said investigators were interviewing a woman from the hotel who they believe was the suspect’s girlfriend. She wasn’t stabbed, he said.

Paredes, who is survived by his wife, daughter and son, started as a cadet in the department before becoming a full-time officer in 2000, according to a news release. The 42-year-old served in several specialized assignments, being appointed to the rank of corporal.

Santana, 31, had been with the El Monte force for less than a year when he was killed. He previously served as a deputy with the San Bernardino County Sheriff’s Department for three years, the news release stated.

This tragic loss hits close to home for us,” the San Bernardino County Sheriff’s Department wrote on Twitter. “Joseph began his career with our department in March 2018 and was a graduate of Academy Class 211. He was a great partner and loved by all who knew him.”

Santana also worked as a part-time public works employee for El Monte for six years before turning to law enforcement. He is survived by his wife, daughter and twin sons.

“These two men were loved,” Lowry said. “They were good men. They paid the ultimate sacrifice, serving their community trying to help somebody.”

“Today, they were murdered by a coward and we are grieving, and that hurts,” he said.

The killings came just one day after a California Highway Patrol officer was shot and critically wounded during a traffic stop in the Studio City area of Los Angeles.

The 27-year-old officer was shot several times. He was in critical but stable condition at a hospital but was expected to recover, the CHP said.

A bloodhound helped police track down a suspect and Pejhmaun Iraj Khosroabadi surrendered to police Tuesday morning in a homeless encampment in the Van Nuys area of the San Fernando Valley, authorities said.

It was not immediately clear whether he had an attorney who could speak on his behalf. 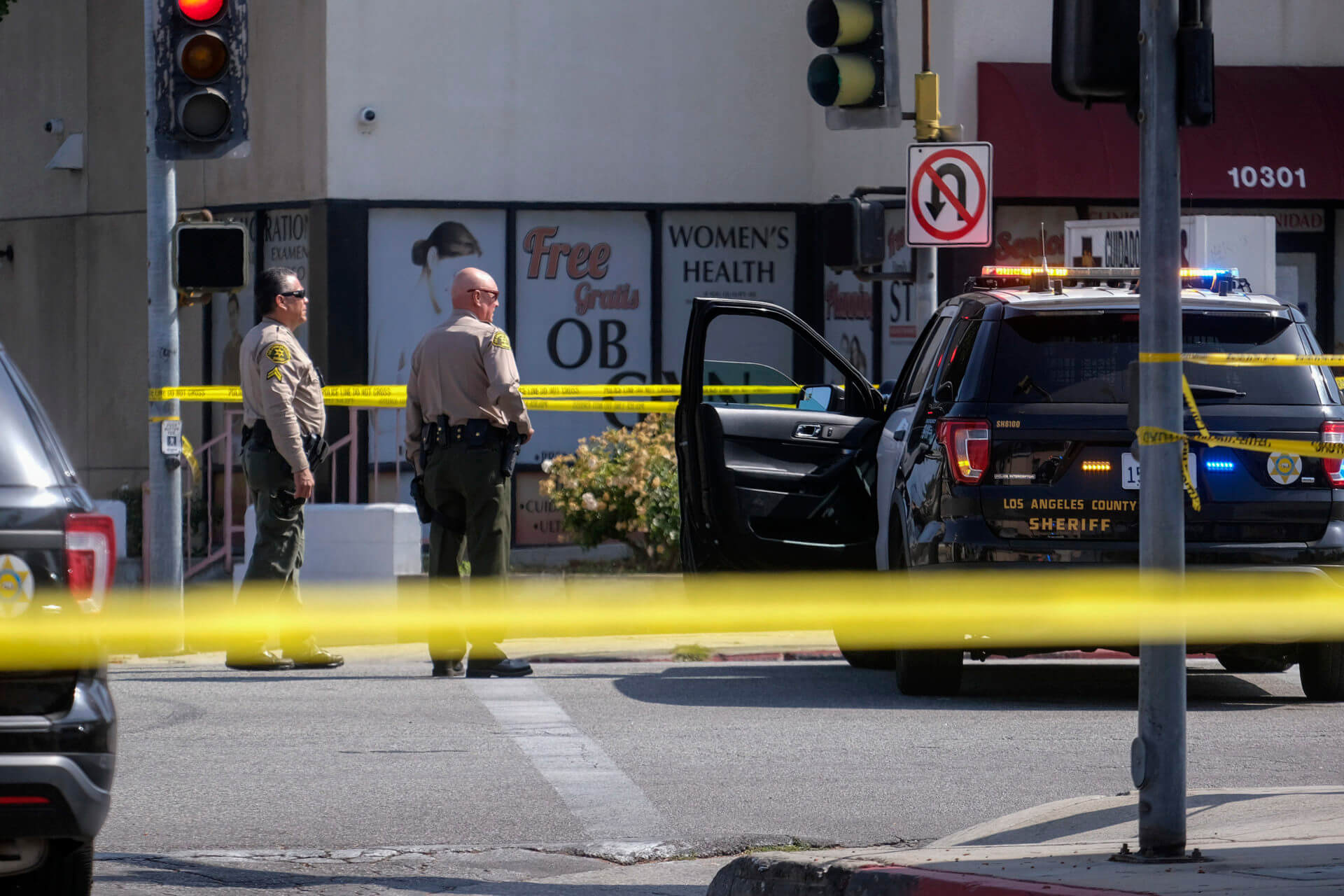