WOODLAND, Calif. (AP) — Two men convicted of killing a pair of California teenagers who vanished six years ago were sentenced Friday to life in prison without possibility of parole, prosecutors said.

Chandale Shannon, 25, of Winters, and Jesus Campos, 22, of Woodland were sentenced for the 2016 kidnapping and killing of the teens, whose bodies were never found despite years of effort. 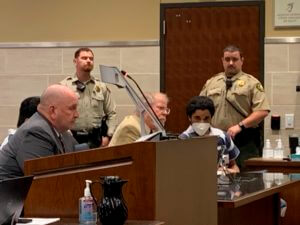 In this photo provided by the Yolo Office of the District Attorney, Chandale Shannon, wearing face mask, and Jesus Campos, mostly blocked at left, sit with their attorneys in Yolo County Superior Court in Woodland, Calif., Friday, July 22, 2022. Shannon, of Winters, and Campos, of Woodland, were both sentenced to life without the possibility of parole by Yolo County. (Yolo Office of the District Attorney via AP)

“The crimes were evil. The families have been impacted terribly. And two boys are dead. I find that Mr. Campos and Mr. Shannon have forfeited their life to live in civilized society,” Yolo County Superior Court Judge David Rosenberg said at the sentencing hearing, according to a statement from the county district attorney’s office.

They were among four people charged with killing 16-year-old Enrique Rios and his friend, 17-year-old Elijah Moore.

Prosecutors said Moore was killed in revenge after stealing 3 ounces (85 grams) of marijuana from three of the defendants.

Rios was shot and killed by David Froste in October 2016 when he refused to call or provide a location for Moore, who was killed several weeks later, on Nov. 4, prosecutors said.

Moore was kidnapped while leaving a barber shop in Woodland, 15 miles (24 kilometers) northwest of Sacramento.

Prosecutors said he was forced into the trunk of a car and taken to Knights Landing on the Sacramento River, where he was bound and was denied pleas to call his mother and release him. Shannon, Froste and Campos and two other men beat him to death with tree branches, crushing his skull.

His body was then placed in a hole, burned and buried.

Shannon, Campos, David Froste and his brother, Jonathan Froste, were arrested in 2018. Authorities tracked their locations and movements through cellphone data and social media activity.

David Froste was convicted of murder in 2018 and is serving a life sentence without chance of parole.

In May, Shannon was convicted of two counts of first-degree murder with special circumstances and kidnapping.

Jonathan Froste pleaded guilty to second-degree murder and testified against the other three defendants. He is awaiting sentencing and is expected to serve 15 years to life in state prison.