VERO BEACH, Fla. (AP) — Two newly hired physical education teachers at a Florida elementary school were arrested after the shooting of a man whose apartment they entered thinking it belonged to someone else following a night of drinking.

One of the teachers mistakenly climbed into bed with the man, his wife and their baby, and the other teacher went to the bathroom before the male occupant of the house escorted them out. The teachers believed they had entered the apartment of one of their friends.

While outside, one of the teachers, Darius Cohen, got into a scuffle with the male occupant, which was broken up by the other teacher, Akkua Hallback. While the male resident was returning to his apartment, Cohen chased him and fired four shots, striking him once in the back, according to an arrest affidavit. The man’s injuries were not life threatening. 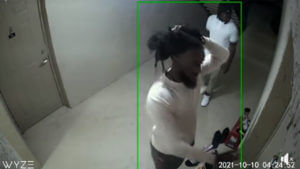 The encounter last week was caught on security video at the apartment building in Vero Beach, Florida.

The teachers drove off, but someone recognized them on the Indian River County Sheriff’s Office Facebook page and called Crime Stoppers.

Both teachers have been fired from their jobs at Sebastian Elementary and Indian River Academy.

After his arrest Thursday, Cohen admitted to detectives that he fired the shots, the arrest affidavit said. Cohen, 26, is facing a charge of attempted felony murder. Court records showed he was still in jail Tuesday, and a court docket showed no attorney listed for him.

His fellow teacher, Hallback, 27, is facing a charge of possession of a controlled substance. Court records showed no attorney listed for him.