Three men accused of supporting terrorism in the plot to kidnap Michigan’s governor were convicted of all charges Wednesday in a trial that focused on paramilitary drills and fierce contempt for government ahead of the 2020 election.

Joe Morrison, his father-in-law Pete Musico, and Paul Bellar were found guilty of supplying “material support” for a terrorist act as members of a group known as the Wolverine Watchmen. 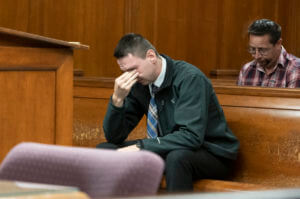 Paul Bellar awaits the verdict in his trial before Jackson County Circuit Court Judge Thomas Wilson on Wednesday, Oct. 26, 2022, at the Jackson County Courthouse in Jackson, Mich. Bellar, Joseph Morrison and Pete Musico are accused of being involved in a plot to kidnap Michigan Gov. Gretchen Whitmer. The three were found guilty of one felony count each of gang membership, providing material support for terrorist acts and felony firearms. (J. Scott Park/Jackson Citizen Patriot via AP, Pool)

They held gun training in rural Jackson County with a leader of the kidnapping scheme, Adam Fox, who was disgusted with Democratic Gov. Gretchen Whitmer and other officials and said he wanted to snatch her.

The trial in state court was an offshoot of the main case in federal court, which produced mixed results: conspiracy convictions for Fox and three others but also two acquittals.

Jurors in Jackson, Michigan, read and heard violent, anti-government screeds as well as support for the “boogaloo,” a civil war that might be triggered by a shocking abduction. Prosecutors said COVID-19 restrictions ordered by Whitmer turned out to be fruit to recruit more people to the Watchmen.

“The facts drip out slowly,” state Assistant Attorney General Bill Rollstin told the jury, “and you begin to see — wow — there were things that happened that people knew about. … When you see how close Adam Fox got to the governor, you can see how a very bad event was thwarted.”

Morrison, 28, Musico, 44, and Bellar, 24, were also convicted of a gun crime and membership in a gang. Prosecutors said the Wolverine Watchmen was a criminal enterprise.

Morrison, who recently tested positive for COVID-19, and Musico were emotional as they watched the verdicts by video away from the courtroom. Judge Thomas Wilson ordered all three to jail while they await sentencing on Dec. 15.

The verdicts “are further proof that violence and threats have no place in our politics,” said Whitmer, who has not participated as a trial witness or spectator in the state or federal cases. “Those who seek to sow discord by pursuing violent plots will be held accountable under the law.”

Attorney General Dana Nessel, a Democrat in a tight race for reelection, hailed the outcome and praised law enforcement. After hearing nine days of testimony, the jury deliberated Tuesday afternoon and for less than two hours Wednesday.

“Jackson County is not known to have, I guess I would say, liberal juries. They tend to be a conservative bunch,” Nessel said. “But I think what they saw here was that this is not a political matter. … These are individuals that didn’t align themselves with any party at all. In fact, they were just anti-government all together.”

Defense attorneys argued that Morrison, Musico and Bellar had broken ties with Fox by late summer 2020 when the Whitmer plot came into focus. Unlike Fox and others, they didn’t travel to northern Michigan to scout the governor’s vacation home or participate in a key weekend training session inside a makeshift “shoot house” in Luther, Michigan.

“In this country you are allowed to talk the talk, but you only get convicted if you walk the walk,” Musico’s attorney, Kareem Johnson, said in his closing remarks.

Defense lawyers couldn’t argue entrapment. But they attacked the tactics and motives of Dan Chappel, 36, an undercover informant. He took instructions from FBI agents, secretly recorded conversations and produced a deep cache of messages exchanged with the men.

Chappel, an Army veteran, said he joined the Watchmen because he wanted to hone his gun skills. But when talk turned to harming police, he went to the FBI and agreed to gather evidence for an investigation that eventually revealed a target on Whitmer.

“If I was ever compromised,” he said, “it would not be a good day.”

Whitmer, who is seeking reelection on Nov. 8, was never physically harmed. Undercover agents and informants were inside Fox’s group for months. The scheme was broken up with 14 arrests in October 2020.

Five of the 14 men are facing charges in state court in Antrim County, the site of Whitmer’s second home. A judge there still must determine whether there is sufficient evidence to send them to trial.