AURORA, Colo. (AP) — Police in the Denver suburb of Aurora have arrested three teenagers in connection with the shooting of three students in a high school parking lot on Friday, a Colorado newspaper reported Monday. A television station quoted the city’s police chief as saying that gang involvement was suspected. 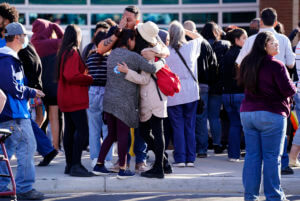 Edgar James, front center, battles with tears as he hugs his daughter, Mia, front right, and his wife, Olga Aguirre, front left, as they are reunited outside Hinkley High School in Aurora, Colo., on Friday, Nov. 19, 2021. Three people were shot Friday in the parking lot of the school, police said. (Philip B. Poston/Sentinel Colorado via AP)

Friday’s shooting at Hinkley High School injured two boys, ages 16 and 17, and a 17-year-old girl, police said. None of the injuries was life-threatening and the suspects and victims have not been identified.

The shooting came four days after six students from another school in the same Denver suburb, Aurora Central High School, were wounded by bullets fired from at least one car driving by a park near the school. Police have not arrested anyone yet in the earlier shootings. The two schools are 3 miles (4.8 kilometers) apart.

Aurora Police Chief Vanessa Williams said Sunday that it appeared the two shootings were not connected, KDVR-TV reported, and that investigators believe there was gang involvement in the Hinkley shooting.

She also issued a warning to criminals: “For those who didn’t care and just shoot in the middle of the day, while kids were returning from lunch, we’re coming for you, we are.”