NEW ORLEANS (AP) — Four teens charged with murder in the dragging death of an elderly New Orleans woman whose arm was severed during a carjacking pleaded not guilty Wednesday.

Shackled and clad in red jumpsuits, the 17-year-old boy, 16-year-old girl and two 15-year-old girls entered the pleas to a charge of second-degree murder in the March 21 death of 73-year-old Linda Frickey, news outlets reported. 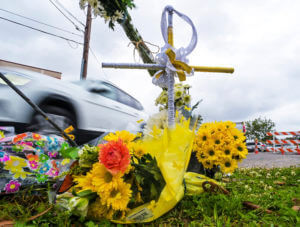 FILE – A collection of flowers and a cross with a halo are seen at the location where the body of Linda Frickey was recovered after she was carjacked and dragged to her death a day earlier on N. Pierce Street in New Orleans, Tuesday, March 22, 2022. Four teens accused in the dragging death of an elderly New Orleans woman whose arm was severed during a carjacking have pleaded not guilty. News outlets report the suspects — a 17-year-old boy, a 16-year-old girl and two 15-year-old girls — entered the pleas Wednesday, May 4, 2022 to a charge of second-degree murder in the March 21 death of 73-year-old Linda Frickey. (Max Becherer/The Times-Picayune/The Times-Picayune/The New Orleans Advocate via AP, File)

Police Chief Shaun Ferguson had said Frickey died after she became entangled in a seatbelt as carjackers sped away with her vehicle that day. The mid-afternoon carjacking happened as neighbors looked on helplessly as she was dragged a block in her own car.

Ferguson said tips led to the arrests of the teens in the hours after the Monday afternoon carjacking. Two were turned in by their parents.

“This was one of the most violent carjackings we’ve ever seen; these young people dragged Mrs. Frickey, severing her arm as they all fled the scene in her car. Today’s grand jury decision to indict these young people for Second Degree Murder is fair and ensures they are appropriately held accountable,” Orleans Parish District Attorney Jason Williams said in a statement.

The defendants’ pleas come a week after Williams announced that each would be charged as adults in Frickey’s death.

“Four or five years is just not enough,” Williams said. “The juvenile sentencing limits would be inadequate to ensure that these young people are appropriately held accountable for taking a life.”

“Definitely glad to be in criminal court. Glad we are going into an adult court because this is too heinous,” Frickey’s sister, Jinny Lynn-Griffin told reporters outside of the courthouse.

Bond for each of the accused will remain at $1 million while they await trial. If convicted, all four would face mandatory life sentences in prison with the possibility for parole after 25 years.