TAMPA, Fla. (AP) — A Florida man was sentenced Wednesday to five years in federal prison for torching a sporting goods store during racial protests in 2020.

A Tampa federal judge imposed the sentence on 21-year-old Terrance Lee Hester Jr., who pleaded guilty to an arson charge in April, according to court records. 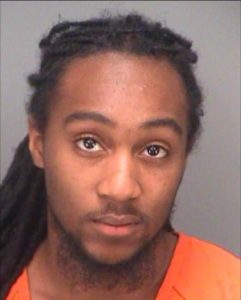 Federal investigators say Hester was identified through video surveillance footage as he threw a flaming white cloth through a broken window at a Champs Sports store. Later, prosecutors say, he was seen with a burning palm frond moving toward the store’s back door.

Damage was estimated at $1.2 million. No one was injured. The potential maximum prison sentence for Hester was 20 years.

The store was burned during several nights of racial justice protests in Tampa following the killing of George Floyd, a Black man, at the hands of a white Minneapolis police officer. Similar protests were held around the country.

The Tampa Bay Times reports that state prosecutors charged 120 people with 265 separate crimes related to the unrest, including burglary and grand theft. Hester’s father is among those charged in the looting of businesses.