ST. PETERSBURG, Fla. (AP) — The founder of a Florida big cat sanctuary featured in the popular “Tiger King” series is suing Netflix and a production company to prevent the use of interviews and footage involving her in an upcoming sequel.

Netflix counters that nonprofit Big Cat Rescue founder Carole Baskin and her husband agreed in writing that the material could be used in the future and that she is trying to block the company’s First Amendment right to free speech. 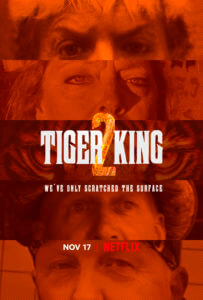 The lawsuit, pending in Tampa federal court, is the latest twist in the saga involving Baskin and Joe Exotic — real name Joseph Maldonado-Passage — who were at the center of the documentary series “Tiger King: Murder, Mayhem and Madness.”

The sequel is set to air beginning Nov. 17, Netflix said in a court filing Monday.

The first series was immensely popular, airing in March 2020 just as coronavirus pandemic restrictions forced people to stay home. It drew some 64 million household viewers in its first month and was nominated for six prime-time Emmy awards, according to the company.

Much of the series has focused on a dispute between Baskin and Maldonado-Passage over treatment of tigers, lions and other big cats at an Oklahoma zoo he formerly operated. Maldonado-Passage is imprisoned after he was convicted of attempting to hire someone to kill Baskin, a tale told in the initial series.

In her lawsuit, Baskin contends that Royal Goode Productions Inc., which produced “Tiger King” for Netflix, led her and husband Howard Baskin to believe their footage would only be used in a single documentary.

Baskin also objects to her portrayal in the first series, especially the insinuation she had something to do with the mysterious 1997 disappearance of her previous husband, Don Lewis, who was declared dead in 2002 but whose remains have never been found.

“The Baskins believed that any sequel, though odious, would not include any of their footage,” the lawsuit says. “Tiger King I was particularly harsh and unfair in its depictions of the Baskins and Big Cat Rescue.”

Baskin declined further comment Tuesday on the lawsuit but did speak to The Associated Press recently about at upcoming Discovery+ two-part series called “Carole Baskin’s Cage Fight,” intended to call attention to the problem of zoos that allow tiger petting and private ownership of the animals. Baskin has crusaded for better treatment of big cats.

“We have never, ever had anybody mislead us and be so dishonest with us as the producers were of Tiger King,” Baskin told AP. “And so they were just a fluke. I mean, that was not like it was our first experience and we were never going to do it again. It was like, OK, well, that was horrible, but that’s just them. That’s not the industry.”

Netflix, however, says the Baskins explicitly agreed in written releases that all their interviews and footage shot at their Tampa cat refuge could be used in future projects. Aside from that, Netlix’s lawyers say tampering with the sequel amounts to unconstitutional prior restraint of the right to free speech and that the Baskins can only sue for damages after it airs.

“Defendants did not need to obtain a release from plaintiffs to use the footage in Tiger King 2 or its promotion trailers,” Netflix attorney Rachel Fugate said in court documents. The Baskins “have no claim at all, much less one that can evade defendants’ First Amendment protections.”

Netflix also notes in its filing that Baskin has used the popularity of “Tiger King” for her own publicity purposes, even appearing on ABC’s “Dancing With The Stars” and essentially becoming a “pop culture phenomenon” because of the program, the company attorneys said.

A Tampa federal judge overseeing the lawsuit had not yet issued a ruling as of Tuesday afternoon.

As for Maldonado-Passage, an appeals court recently ruled that his 22-year prison sentence on the Baskin murder-for-hire plot should be reduced. He being held at a federal prison in Fort Worth, Texas.
Maldonado-Passage also announced last week that he has an aggressive form of prostate cancer and, in a Twitter post, asked people to pray for him.
_____
Associated Press writer Alicia Rancilio in New York contributed to this story.