MILWAUKEE (WTMJ-TV) — Authorities are now searching for suspects after six people were found dead in a home on Milwaukee’s north side on Sunday. Authorities are investigating the deaths as homicides.

Police were called to a home at 21st and Wright for a welfare check. Inside they found five deceased men and one deceased woman, according to the medical examiner’s office. 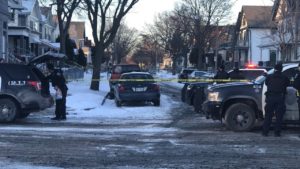 Authorities say 6 people were found dead inside a Milwaukee home on Sunday. (WTMJ-TV)

Online data filed by the ME shows three of the male victims’ ages are 43 years old, 31 years old and 42 years old.

The motive, and person or people responsible, is still unknown.

Neighbors, friends and relatives of the victims stood outside the crime scene in shock Sunday night.

A team from Milwaukee’s office of violence prevention showed up to help try and support the community through another horrific crime.

The director of that office sharing her utter frustration.

“This is ridiculous and I’m sorry I don’t know what better word to say. The community is tired, we are tired of seeing people’s lives snuffed out too soon,” said Director Arnitta Holliman.

While there is not a suspect in custody for this crime, police say there is no information to suggest there is a threat to the community.

They’re hoping anyone with any information on this comes forward.

Autopsies are scheduled for Monday.

The ME says they investigated a total of 8 homicides this weekend, bringing the total number of homicides in the county so far this year to 21. That’s compared to 9 homicides at this time last year, the ME says.

Alderman Russell W. Stamper, II, whose district the incident happened in, said in a statement:

“The horrific news of six individuals being found dead near North 21st and West Wright streets has left the community saddened, angry and shaken. To those who have suffered the loss of a family member, friend or neighbor at the hands of this violence, I offer my condolences and my thoughts are with you during this time.

I am saddened by this developing situation. There are no words to accurately describe the feelings of the community at the continuing violence, but one thing remains perfectly clear. WE MUST DO BETTER.

When it comes to curbing violence each and every single one of us needs to agree enough is enough, and we must stand up and speak up to help make a difference. No one should ever discount the impact they can make by voicing a concern over a situation that could lead to escalated violence.

I would implore anyone with any information regarding these deaths to contact Milwaukee Police at 414-935-7360 or Crime Stoppers at 414-224-TIPS or use P3 Tips App to remain anonymous.

For those who were affected by this incident, you can receive assistance by calling the city’s Mobile Trauma Response Team (MPD), at 414-257-7621 or by contacting Milwaukee County’s 24-hour Mental Health Crisis Line at 414-257-7222.” 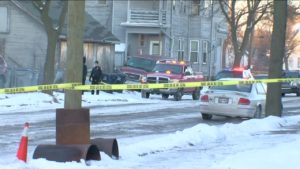 Authorities say 6 people were found dead inside a Milwaukee home on Sunday. (WTMJ-TV)

“Six homicides at a north side location, a total of nine homicides thus far this weekend and 14 homicides in our city to date in 2022. Milwaukee continues to see an alarming rate of violent crime carrying over from the past two years. To say, “enough is enough” is an understatement.

To address the violent crime problem in our city we must have law enforcement on our streets maintaining order and preserving peace. To heed the calls of those who want further cuts to the police budget at a time when we are witnessing record violence in our city will continue to erode the confidence of residents who want to feel safe. It will hinder Milwaukee’s ability to attract new businesses and industry to our city. It will continue to put fear in people wanting to call Milwaukee home or visit our many destinations and cultural attractions.

As of Jan. 23, there have been 20 homicides, according to Milwaukee police.

“The murders discovered today on a residential block in the heart of our city are horrific. First, I offer my condolences to the families and friends of the victims. Whatever the circumstances, we must share the grief of those who have lost loved ones.

It is important not to feel numbed by the ongoing violence in our community. A horrible crime has again occurred, and it is not a movie or a fictional account. These victims died in our city, in one of our neighborhoods.

We remain steadfast in our efforts to reduce violence. We will achieve that through strengthened and improved law enforcement, through community intervention, and through a renewed commitment to prevention. Again, we can never accept murderous violence as routine, and we must together recommit ourselves to our shared responsibility to find solutions and make our city safer.”

This story was originally published Jan. 23 by WTMJ-TV in Milwaukee, an E.W. Scripps Company.