COLUMBIA, S.C. (AP) — A woman who reported seeing a man later identified as South Carolina attorney Alex Murdaugh bloodied on a roadside after a shooting told an emergency dispatcher she didn’t stop because it “looks like a setup,” according to 911 calls released Friday.

The South Carolina Law Enforcement Division made public the emergency calls from the aftermath of the Sept. 4 shooting in which a bullet grazed Murdaugh’s head.

Authorities have since charged Murdaugh with insurance fraud, saying he tried to have himself killed that day so his only surviving son could collect $10 million in a life insurance payout. The attorney is also facing charges he stole $3.4 million in insurance money meant for the sons of his housekeeper, who died in 2018 a few weeks after falling at the family’s home, investigators said.

On the 911 call from a man and a woman, the female passerby tells the dispatcher that she saw a man covered in blood, waving his hands on the side of the road. The man accompanying her observes that the man’s SUV had the trunk open and the caution lights on.

“He looks fine, but it kind of looks like a setup,” the woman says. “So we didn’t stop.”

“Oh, I don’t blame you,” the dispatcher responds.

The calls released Friday also include two made by Murdaugh himself near the scene of the rural road in Hampton County where Murdaugh had stopped on Sept. 4.

State police have opened at least six investigations into the 53-year-old heir to a legal empire in Hampton County, South Carolina and his family since he found his wife and other son shot dead outside their Colleton County home in June. Among the investigations is a probe of millions of dollars allegedly missing from the huge law firm founded a century ago by his great-grandfather.

During Murdaugh’s first emergency call, which is about four minutes long, he informs a dispatcher that he had stopped after getting a flat tire: “Somebody stopped to help me, and when I turned my back they tried to shoot me,” Murdaugh says.

Murdaugh proceeds to say he is “bleeding pretty bad” from somewhere on his head, describing the shooter as a “white fella” who is “a fair amount younger than” him with “really, really short hair.”

In a second call lasting more than seven minutes, Murdaugh says he has secured a ride to the hospital from someone at the scene, and later says he is hanging up because he has encountered the ambulance sent for him by a dispatcher. 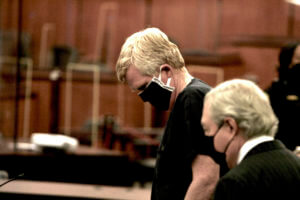 Smith has denied shooting Murdaugh, telling The Associated Press that Murdaugh asked to meet with him, but didn’t give a reason. When they got to the lonely road, Murdaugh asked Smith to shoot him. Smith refused, they wrestled over the gun and it fired once.

Smith told the AP he wasn’t sure if Murdaugh was hit. But in October TV interviews, he said he was certain Murdaugh was not struck by the bullet.

Smith took the gun and got rid of it. He has not been clear about where he ditched it or why he didn’t give it to police.

“With a friend like that, who needs enemies,” Smith told the AP.

Murdaugh’s lawyers have said he bought drugs from Smith. They gave media outlets medical records they said show he was shot. They mention “gunshot” several times and said he had blood all over his shirt when he arrived by helicopter to a hospital in Savannah, Georgia.

Notes from doctors indicate they saw a bullet wound, Murdaugh had bleeding on his brain and part of his skull was fractured, according to the records.

Murdaugh is currently detained at the Alvin S. Glenn Detention Center in Columbia after a state judge denied bond Tuesday, saying the attorney’s considerable financial resources and mental instability appear for now to make it too risky for him to await trial outside of jail.

He had previously spent six weeks at drug rehab centers in Georgia and Florida, his attorneys said, battling an opioid addiction.