HARTFORD, Conn. (AP) — Conspiracy theorist Alex Jones was defiant and cited free speech rights during a lawsuit deposition in April when questioned about calling the Sandy Hook Elementary School shooting a hoax and the effect the statement had on families who lost loved ones, according to court documents released Thursday.

Jones insisted he wasn’t responsible for the suffering that Sandy Hook parents say they have endured because of the hoax conspiracy, including death threats and harassment by Jones’ followers, according to partial transcripts of the deposition in Bridgeport, Connecticut, on April 5 and 6. Several Sandy Hook families are suing Jones for defamation over the hoax claim. 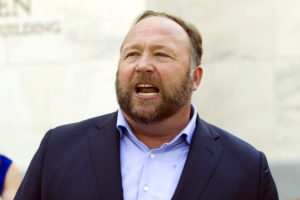 FILE – Infowars host Alex Jones speaks outside of the Dirksen building on Capitol Hill, Sept. 5, 2018, in Washington. Jones was defiant and cited free speech rights during a deposition in April, as part of a lawsuit by relatives of some of the Sandy Hook Elementary School shooting victims who are suing him for calling the massacre a hoax, according to court documents released Thursday, July 14, 2022. (AP Photo/Jose Luis Magana, File)

“No, I don’t (accept) responsibility because I wasn’t trying to cause pain and suffering,” Jones said, according to the transcripts. “And this is they are being used and their children who can’t be brought back being used to destroy the First Amendment.”

Jones added, “If questioning public events and free speech is banned because it might hurt somebody’s feelings, we are not in America anymore. They can change the channel. They can come out and say I’m wrong. They have free speech.”

After first promoting the hoax conspiracies on his Infowars show and other media platforms, Jones later said he did believe the shooting happened but has maintained he had the right to say it didn’t.

A gunman killed 20 first graders and six educators at the Newtown, Connecticut, school on Dec. 14, 2012. Families of eight of the victims and an FBI agent who responded to the school are suing Jones and his company, Free Speech Systems.

Connecticut Judge Barbara Bellis found Jones liable for damages to the families in November. Jury selection for a trial to determine how much money he should pay them is scheduled to begin Aug. 2 in Waterbury.

A judge in Texas, where Jones and Infowars are based in Austin, issued similar default rulings and found Jones liable for damages to Sandy Hook families who filed lawsuits in that state over the hoax conspiracy promoted by Jones. Trials on damages also are pending there, with the jury selection in the first one scheduled to begin July 25.

The partial transcripts were released ahead of a court hearing before Bellis on Thursday to prepare for the trial. They were included in a motion by the families’ lawyers, Alinor Sterling and Christopher Mattei, asking the judge to bar Jones from challenging her liability finding against Jones during the trial.

Questioned by Mattei during the deposition, Jones called Bellis’ ruling “fraudulent,” accused her of lying and alleged she was friends with a lawyer in Sterling and Mattei’s firm, Koskoff, Koskoff & Bieder.

“I’m sure your pet judge will do whatever you want,” Jones said.

Mattei asked Jones if he had said the Sandy Hook shooting wasn’t real. Jones’ lawyer, Norman Pattis, objected to the question. Jones then said, “It is my right as an American citizen. … I have said that in context I could see how people would believe it’s totally staged and synthetic.”

Mattei later asked Jones if he considered the Sandy Hook families to be “unwitting pawns” in a plot against him.

“I have just seen really a lot of sad people that lost their children using me to keep the story of their children in the news and gun control in the news. And so … then I see the accusations by you guys that I made all this money off Sandy Hook when I know I didn’t.”

Thursday’s court hearing was held to deal with various scheduling matters and motions filed by both sides in the case. Bellis did not issue any major rulings.

Jones has filed motions to bar certain evidence from being presented at the Connecticut trial, including information about “white supremacy and right-wing extremism.”

Pattis also objected to media coverage of Thursday’s hearing, saying pretrial publicity could undermine Jones’ right to a fair trial. Bellis denied the objection, saying it did not outweigh the presumption of open courtrooms.

Pattis noted that on Tuesday, Jones figured prominently in a hearing of the U.S. House committee investigating the Jan. 6, 2021, insurrection at the nation’s Capitol. The panel played videos of Jones and others vowing that Jan. 6 would be the day they would fight for Donald Trump.