PHILADELPHIA (AP) — A jury cleared an Amtrak engineer Friday of all charges stemming from a derailment that left eight people dead and hundreds injured in Philadelphia in 2015, concluding that his operation of the train at more than twice the speed limit on a curve didn’t constitute criminal negligence.

The jury took just over an hour to acquit Brandon Bostian, 38, of causing a catastrophe, involuntary manslaughter and reckless endangerment — one count for each injury and death. Amtrak had earlier settled civil litigation over the crash for $265 million. 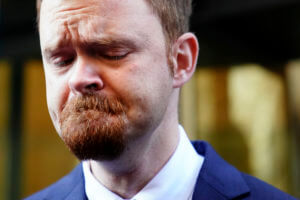 Brandon Bostian, the Amtrak engineer involved in a 2015 derailment in Philadelphia that killed eight people and injured more than 200, reacts as his attorney speaks with members of the media outside the criminal justice center in Philadelphia, Friday, March 4, 2022. A jury acquitted 38-year-old engineer Bostian of causing a catastrophe, involuntary manslaughter and reckless endangerment after a little more than an hour of deliberations. (AP Photo/Matt Rourke)

The train rounded a curve at about 106 mph, more than twice the 50 mph speed limit, before it derailed in north Philadelphia.

Bostian’s lawyer described him as a lifelong train buff who had a perfect work record until he was distracted by reports of people throwing rocks in the area just before the crash. He could have been sent to prison for years, or even for life, if convicted, given the high number of counts against him.

“It’s been seven years for him wondering if he’ll ever get his life back. Today the jury gave him his life back,” defense lawyer Brian McMonagle said after the verdict. “We’ve been saying from the beginning there was never a crime committed here by Brandon.”

In closing arguments, McMonagle said the criminal actors in the case were those who threw the rocks at the train ahead. No one was ever apprehended.

Federal safety investigators concluded that Bostian lost what they call “situational awareness” on the track, thinking he was past an S-curve and on a straightaway when he accelerated from about 65 mph to 106 mph. In fact, he was in the middle of the S-curve. Investigators found no evidence he was impaired, fatigued or using his cellphone at the time.

The key question for the jury was whether Bostian — who no longer works for Amtrak — sped up intentionally, knowing the risks.

The case has a long legal history, with judges debating whether Bostian’s actions constituted a crime. Common Pleas Judge Barbara McDermott, who presided at the seven-day trial, questioned whether the evidence was enough but said she would consider the issue after taking a jury verdict. The point now appears to be moot. 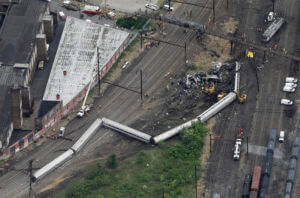 FILE- In this Wednesday, May 13, 2015, file photo, emergency personnel work at the scene of a derailment in Philadelphia of an Amtrak train headed to New York. (AP Photo/Patrick Semansky, File)

Prosecutors say Bostian acted with reckless disregard for the safety of his passengers, who were traveling from Washington to New York that Tuesday evening. The train had stopped at Philadelphia’s 30th Street station about 10 minutes earlier and was heading north.

One trial witness, former New York firefighter Charles Gildersleeve, told jurors how he spent two days searching hospitals for his brother after the crash, only to learn he had died. Robert Gildersleeve had been heading to New York for a work conference after attending his son’s lacrosse practice that evening.

Another witness, Blair Berman, described running into Bostian amid the wreckage and asking to borrow his phone. He did not tell her he had been driving the train. She asked him where they were, and Bostian told her, accurately, they were in an area called Franklin Junction.

Prosecutors used the point to argue that Bostian knew where he was when he crashed and should have known the speed limit.

Lawyer Tom Kline, who represents both witnesses, along with other Amtrak 188 families, said the verdict does not negate the “public accountability” that the trial brought. The victims finally heard Bostian’s lawyer acknowledge that the engineer made mistakes, he said.

“That provides some measure of closure to the eight families who lost loved ones, and the scores of others who were catastrophically injured by Mr. Bostian’s conduct that day,” Kline said.

Philadelphia’s top prosecutor had declined to pursue criminal charges, but the Attorney General’s Office later took it over.

“There is no question that the excessive speed of the train that the defendant operated resulted in death and injury to his passengers,” the state Attorney General’s Office said in a statement.

The crash led Congress to raise the previous $200 million limit on settlements for individual Amtrak crashes to $295 million.

The jury had begun weighing the charges Friday morning when an alternate had to step in because one juror had a death in the family. The jury then began its deliberations over from the start.