Cleveland Browns quarterback Deshaun Watson was suspended for six games Monday after being accused by two dozen women in Texas of sexual misconduct during massage treatments, in what a disciplinary officer said was behavior “more egregious than any before reviewed by the NFL.”

The punishment handed out by the game’s disciplinary officer, former federal judge Sue L. Robinson, fell well short of what the NFL had asked for: an open-ended suspension of at least a year for violating the league’s personal conduct policy.

Watson, who played for four seasons with the Houston Texans before being traded to Cleveland in March, recently settled 23 of 24 lawsuits filed by women alleging sexual harassment and assault during the treatments in 2020 and 2021.

The NFL has three days to appeal the decision.

“Although this is the most significant punishment ever imposed on an NFL player for allegations of nonviolent sexual conduct, Mr. Watson’s pattern of conduct is more egregious than any before reviewed by the NFL,” Robinson wrote in the conclusion to her 16-page report.

As a condition of his reinstatement, Robinson mandated that Watson only use massage therapists approved by the team for the rest of his career. And she said Watson must have “no adverse involvement with law enforcement and must not commit any additional violations” of the personal conduct policy.

The NFL Players Association has said it would abide by Robinson’s ruling. If the NFL appeals, Commissioner Roger Goodell or someone he designates will make the ruling on an appropriate punishment, per terms of the collective bargaining agreement. The union then could try to challenge that ruling in federal court. 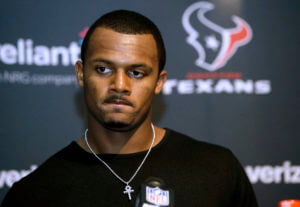 The league had pushed for a suspension of at least a year and a $5 million fine for the 26-year-old Watson during a three-day hearing before Robinson in June, two people familiar with the discussions told The Associated Press on condition of anonymity because the hearing wasn’t public.

The NFL presented a 215-page report based on dozens of interviews, including testimony from four of 12 women interviewed by league investigators. Robinson determined that Watson violated three provisions of the personal conduct policy: sexual assault; conduct posing a genuine danger to the safety and well-being of another person; and conduct that undermines or puts at risk the integrity of the NFL.

Robinson said the league acknowledged at the hearing that its recommended punishment was “unprecedented” and she concluded the NFL should not change its standards of discipline for nonviolent sexual assault without giving fair notice to players.

“Defining prohibited conduct plays a critical role in the rule of law, enabling people to predict the consequences of their behavior,” she wrote. “It is inherently unfair to identify conduct as prohibited only after the conduct has been committed, just as it is inherently unjust to change the penalties for such conduct after the fact.”

Robinson rejected Watson’s denials of wrongdoing and considered his “lack of expressed remorse” to be an aggravating factor.

“As to mitigating factors, he is a first offender and had an excellent reputation in his community prior to these events. He cooperated in the investigation and has paid restitution,” she wrote.

Watson, who signed a fully guaranteed $230 million, five-year contract, will lose only $345,000 if the suspension is unchanged because his base salary this season is $1.035 million. His $45 million signing bonus is not affected by the suspension.

In a statement, the league said it is “reviewing Judge Robinson’s imposition of a six-game suspension and will make a determination on next steps.”

This was the first case for Robinson, who was jointly appointed by the NFL and the union to handle player misconduct — a role previously held by Goodell.

Watson can continue to practice and play in exhibition games before his suspension begins the first week of the regular season. He can return to practice in Week 4 and would be eligible to play on Oct. 23 when the Browns play at Baltimore. 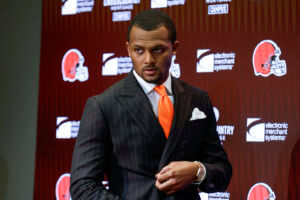 He waved toward cheering fans while he and his teammates began their stretching period before practice Monday in Berea, Ohio. “We got your back, Watson!” yelled one.

Rhonda Whitelock, president of the Touchdown Browns Backers Club in suburban Cleveland, said a six-game suspension is not long enough given the accusations made by so many women. She said there are some men and women in the club who are “disgusted” by the team’s decision to trade for Watson and won’t watch the Browns anymore, while others believe Watson’s accusers aren’t telling the truth.

“We respect Judge Robinson’s decision, and at the same time, empathize and understand that there have been many individuals triggered throughout this process,” the Haslams said. “We know Deshaun is remorseful that this situation has caused much heartache to many and he will continue the work needed to show who he is on and off the field, and we will continue to support him.”

After learning the ruling was imminent, the NFLPA issued a joint statement with Watson on Sunday night, saying they will not appeal and urged the league to follow suit. The union had argued Watson shouldn’t be punished at all because he was not convicted of a crime.

Two grand juries in Texas declined to indict Watson on criminal complaints brought by 10 of the women.

Watson, a three-time Pro Bowl pick with the Texans, has seen his playing career stalled by the allegations. He sat out the 2021 season after demanding a trade before the allegations came out.

In their lawsuits, the women accused Watson of exposing himself, touching them with his penis or kissing them against their will. One woman alleged Watson forced her to perform oral sex.

Watson has denied all wrongdoing, insisting any sexual activity with three of the women was consensual. He publicly insisted his goal was to clear his name before agreeing to confidential financial settlements with 20 of the women June 21.

“This case started because one woman had the fortitude to step forward and make her voice heard,” said attorney Tony Buzbee, who represents the women in the civil lawsuits. “Her courage inspired many others with the same experience. None of this saga would have occurred without that one brave voice. One person can make a difference.” 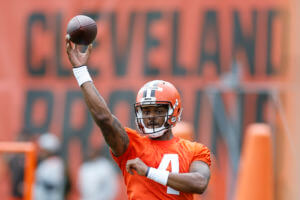 FILE – Cleveland Browns quarterback Deshaun Watson throws a pass during an NFL football practice at the team’s training facility, May 25, 2022, in Berea, Ohio. The NFL suspended Watson for six games on Monday, Aug. 1, 2022 for violating its personal conduct policy following accusations of sexual misconduct made against him by two dozen women in Texas, two people familiar with the decision said. (AP Photo/Ron Schwane, File)

Buzbee said his legal team was not involved in the process that led to Watson’s suspension and that he wouldn’t comment on the decision. However, he did note that “only a small fraction of those women that we represent were ever spoken to by the NFL’s lawyers.”

Watson’s high-profile case has renewed scrutiny of the league’s handling of player misbehavior, along with its support for women.

Since Watson was traded to the Browns, fans questioned whether the league had the authority to ban him from playing despite no criminal charges.

The league has been sensitive about its image and handing out the appropriate discipline for Watson after being criticized for its handling of previous cases of domestic violence or sexual misconduct against women involving Baltimore running back Ray Rice, Pittsburgh quarterback Ben Roethlisberger and Cleveland running back Kareem Hunt, among others.

The Browns were widely condemned for signing Watson. The team has been desperate to find a long-term answer at quarterback — they’ve had a league-high 32 starters since 1999 — and many questioned why the team would take on a player with so much baggage.

At his introductory news conference after being traded to Cleveland, Watson was adamant about his innocence.

“I have never assaulted, disrespected or harassed any woman in my life,” he said at the dais, where he was joined by Browns general manager Andrew Berry and coach Kevin Stefanski. “I was raised differently. That is not my DNA. That is not my culture. That is not me as a person.”

The remaining lawsuit could still go to trial, but both sides agreed to wait until 2023, after after the upcoming season.

On July 15, 30 women settled lawsuits against the Texans after claiming the team ignored and enabled Watson as he harassed and assaulted them during the therapy sessions. Terms of the settlements were confidential. 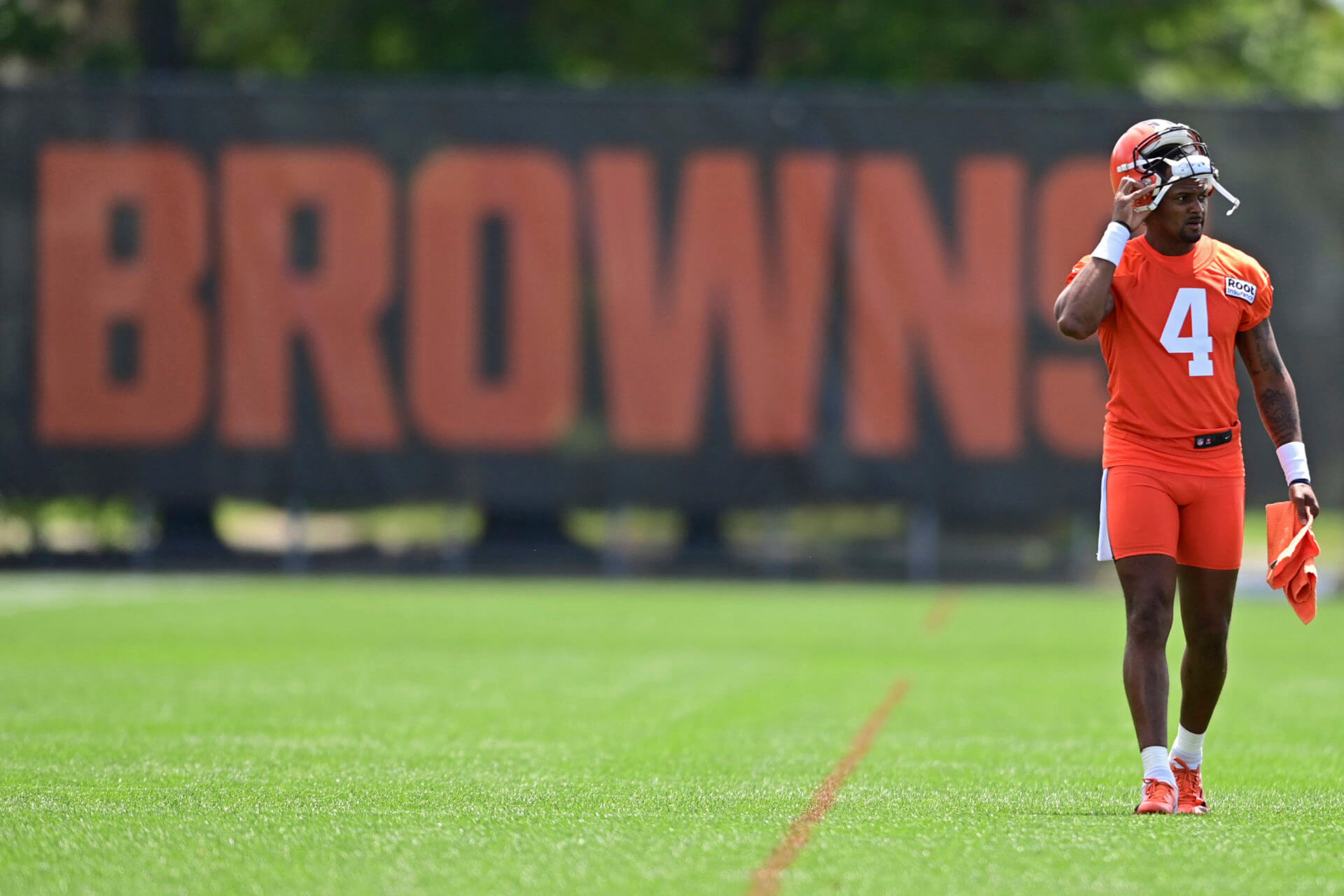