Around 3 a.m., deputies were called to a home along State Route 89 for what was thought to be a trespassing situation. Investigators learned that 54-year-old Lloyd Beard of Prescott had broken into a home with a mother and her two children inside. 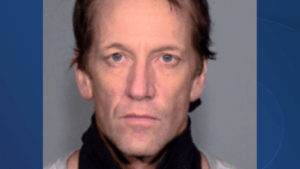 Beard had made his way into the room of the 12-year-old girl, who was sleeping at the time. YCSO says he started touching the girl and got into bed with her.

The daughter was able to wake the mother and she removed Beard from the home after he refused to leave.

Officials say Beard exposed himself and threatened the woman before he took off running.

The mother and her 16-year-old son then chased after Beard and detained him until law enforcement arrived.

He was treated for minor injuries and taken into custody.

“The quick action of the mother saved not only her daughter from further trauma but managed to help take a dangerous predator off the streets,” YCSO said in a press release. “Lloyd is a level 3 sex offender who registered with the Yavapai County Sheriff’s Office last week.”

According to YCSO’s sex offender database, Beard’s past offenses include “invasion of privacy for sexual gratification” in Colorado and failure to register as a sex offender in Arizona.

This story was originally published Aug. 17 by KNXV in Phoenix, an E.W. Scripps Company.