SMITHSBURG, Md. (AP) — A man opened fire at a manufacturing business in rural western Maryland on Thursday, killing three people before the suspect and a state trooper were wounded in a shootout, authorities said.

The Washington County Sheriff’s Office said in a news release that three victims were found dead at Columbia Machine Inc. in Smithsburg and a fourth victim was critically injured. The suspect then fled in a vehicle and was tracked down by Maryland State Police, according to the news release. 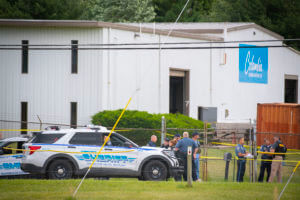 The suspect and a trooper were wounded in an exchange of gunfire, the sheriff’s office said. Both were being treated for their injuries.

Gov. Larry Hogan, who was briefed on the shooting, said that the man opened fire on troopers before at least one officer returned fire and wounded the suspect.

“The suspect fired and shot the state trooper in the shoulder, who then returned fire and shot him,” Hogan told reporters.

Authorities did not have information on whether the suspect and victims were employees of the company where the shooting took place, Sheriff’s Office Sgt. Carly Hose said at a news conference.

Family members of workers at the manufacturer were gathering at a fire station in downtown Smithsburg Thursday evening waiting for information on their loved ones. They declined to speak to a reporter. 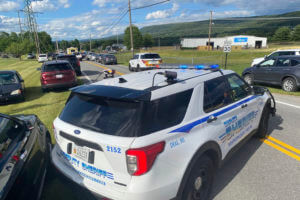 Several hours after the shooting, numerous law enforcement officers remained at the scene. Police had closed off the road that runs past the Columbia Machine Inc. facility, and yellow tape blew in the wind outside the business.

Smithsburg, a community of nearly 3,000 people, is just west of the Camp David presidential retreat and about 75 miles (120 kilometers) northwest of Baltimore. The manufacturing facility was in a sparsely populated area northeast of the town’s center with a church, several businesses and farmland nearby.