ANCHORAGE, Alaska (AP) — An Alabama man accused of using pepper spray and throwing a metal rod at law enforcement protecting the U.S. Capitol during the Jan. 6 insurrection has been arrested in Alaska, according to court documents filed in federal court.

The FBI took Christian Manley into custody Friday in Anchorage. During an arraignment Tuesday, a judge set a detention hearing for him for Thursday afternoon. 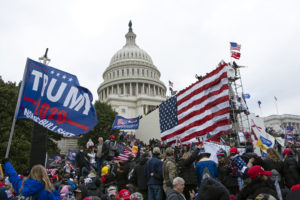 Rioters loyal to then-President Donald Trump outside of U.S. Capitol on Jan. 6, 2021, in Washington. Even as the first of the more than 500 federal Capitol riot defendants have begun to plead guilty, scores of suspects remain unidentified, reflecting the massive scale of the Justice Department’s investigation and the grueling work authorities still face to track everyone down. (AP Photo/Jose Luis Magana)

Manley faces several charges, including assaulting or resisting officers using a dangerous weapon; civil disorder; exhibiting disorderly conduct and demonstrating in a Capitol building; and engaging in physical violence and disorderly and disruptive conduct in a restricted building.

Court documents did not list an attorney for Manley. His ties to Alaska were not immediately known.

According to a statement filed in the case by Stephen Lee, an FBI special agent in Birmingham, Alabama, an informant met someone named Christian from Alabama, who had attended the riot. That person a week later called back to give them the last name Manley.

Agents then met the informant and showed them still photographs of wanted individuals taken from videos shot during the insurrection. That person identified him from a photo the FBI showed them and said Manley had earlier shown them the same photo from a list of wanted persons distributed by the FBI.

The FBI then found Manley’s phone number had used a cell site near the Capitol on Jan. 6, according to the statement.

Later, the FBI interviewed a relative of Manley’s, who identified him and said Manley had discussed going to the Jan. 6 rally, the document alleges.

The FBI agent’s statement includes photos taken from video alleging to show Manley approaching the Capitol with a can of pepper spray and then spraying it toward officers inside the Lower West Terrace archway of the Capitol.

When the can is emptied, authorities allege he threw it at officers before later footage shows him spraying another can and throwing it when it is empty.

The statement then alleges he accepted a metal rod from another rioter and threw it at officers. The document alleges he moved toward the officers defending the entrance, braced himself against a wall and used his body to push a door against officers trying to defend the entrance.