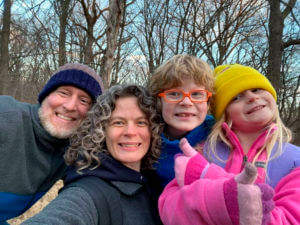 In this 2022 provided by the Schmidt and Morehead families, Tyler Schmidt, left, and his wife Sarah pose with their son Arlo and daughter Lula, right, while hiking near Cedar Falls, Iowa. Police said Saturday, July 23, 2022, the Iowa couple and their 6-year-old daughter were fatally shot while camping in a state park by a man from Nebraska who later turned the gun on himself. The couple’s 9-year-old son survived. (Courtesy of the Schmidt and Morehead families)

Their 6-year-old daughter, Lula Schmidt, died from a gunshot wound and strangulation, officials said. All three family members’ deaths have been ruled homicides.

The department confirmed Thursday that the killer was Anthony Sherwin, 23, of LaVista, Nebraska, who died from a self-inflicted gunshot wound after the family was attacked early on the morning of July 22 in their tent at the Maquoketa Caves State Park campground.