Mark Chastain, Billy Chastain, Mike Sparks, and Alex Stevens have been missing since Oct. 9, but police couldn’t confirm if the four bodies found were those men. A medical examiner will make the official identifications. 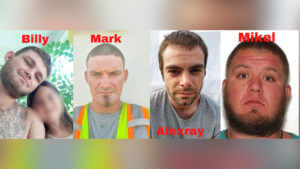 However, investigators updated families in case it turns out to be their loved ones.

“I hope this ain’t them, but it’s looking like it might be,” Bennie Harjo, who knew them said. Harjo is a friend of the four men who disappeared.

He pulled up to where police had Sharp Road blocked off after Friday afternoon’s discovery.

Prentice said just before 2:00 p.m. Friday someone reported a mysterious item in the area near the bridge over Deep Fork River.

“Officers responded and discovered what appears to be multiple human remains along the river,” Prentice said.

Police blocked off the road leading to that bridge as investigators worked on gathering more evidence. Police said multiple agencies worked day and night to recover and process those remains and find out who they belong to.

Prentice sent out an update around 10 p.m. saying the bodies had been recovered from the water.

“If these are your loved ones, all we’re doing is switching focus and we’re going to work just as hard to find out what happened to them as we did trying to find them,” Prentice said.

This story was originally published Oct. 14 by KRJH in Tulsa, an E.W. Scripps Company.