ALBANY, N.Y. (AP) — Happy the elephant may be intelligent and deserving of compassion, but she cannot be considered a person being illegally confined to the Bronx Zoo, New York’s top court ruled Tuesday.

The 5-2 decision by the state Court of Appeals comes in a closely watched case that tested the boundaries of applying human rights to animals. 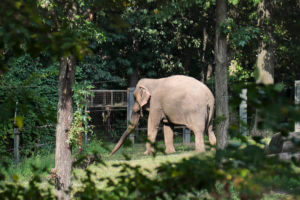 The zoo and its supporters warned that a win for advocates at the Nonhuman Rights Project could open the door to more legal actions on behalf of animals, including pets, farm animals and other species in zoos.

The court’s majority echoed that point.

The decision written by Chief Judge Janet DiFiore said that “while no one disputes that elephants are intelligent beings deserving of proper care and compassion,” a writ of habeas corpus is intended to protect the liberty of human beings and does not apply to a nonhuman animal like Happy.

The decision affirms a lower court decision and means Happy will not be released through a habeas corpus proceeding, which is a way for people to challenge illegal confinement. Granting that right to Happy to challenge her confinement at a zoo “would have an enormous destabilizing impact on modern society,” read the majority decision.

“Indeed, followed to its logical conclusion, such a determination would call into question the very premises underlying pet ownership, the use of service animals, and the enlistment of animals in other forms of work,” read the decision. 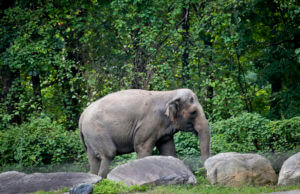 The Bronx Zoo argued Happy is neither illegally imprisoned nor a person, but a well-cared-for elephant “respected as the magnificent creature she is.”

The advocates at the Nonhuman Rights Project argued that Happy is an autonomous, cognitively complex elephant worthy of the right reserved in law for “a person.”

Two judges, Rowan Wilson and Jenny Rivera, wrote separate, sharply worded dissents saying the fact that Happy is an animal does not prevent her from having legal rights. Rivera wrote that Happy is being held in “an environment that is unnatural to her and that does not allow her to live her life.”

“Her captivity is inherently unjust and inhumane. It is an affront to a civilized society, and every day she remains a captive — a spectacle for humans — we, too, are diminished,” Rivera wrote.

The ruling from New York’s highest court cannot be appealed. The Nonhuman Rights Project has failed to prevail in similar cases, including those involving a chimpanzee in upstate New York named Tommy.

Steven Wise, the group’s founder, said he was pleased it managed to persuade some of the judges. He noted that the group has a similar case underway in California and more planned in other states and other countries.

“We will take a really close look at why we lost and we’ll try to make sure that that doesn’t happen again to the extent that we can,” he said.

Happy was born in the wild in Asia in the early 1970s, captured and brought as a 1-year-old to the United States. Happy arrived at the Bronx Zoo in 1977 with fellow elephant Grumpy, who was fatally injured in a 2002 confrontation with two other elephants.