SAN FRANCISCO (AP) — The younger brother of a man suspected in the kidnapping and killings of an 8-month-old baby, her parents and an uncle, was arrested on suspicion he helped his brother destroy evidence, authorities said Friday.

Alberto Salgado, 41, was arrested late Thursday and accused of criminal conspiracy, accessory, and destroying evidence, the Merced County Sheriff’s Office said. He’s booked in the Merced County Jail — the same place where suspect Jesus Salgado, 48, is being held on kidnapping and murder charges. It wasn’t clear whether either brother had a lawyer who could speak on their behalf. 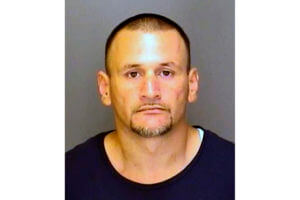 The bodies of Aroohi Dheri; her mother Jasleen Kaur, 27; father Jasdeep Singh, 36; and uncle Amandeep Singh, 39, were found by a farm worker late Wednesday in an almond orchard in a remote area in the San Joaquin Valley, California’s agricultural heartland.

Jesus Salgado — a convicted felon who tried to kill himself a day after the kidnappings — had worked for the family’s trucking business and had a longstanding feud with them, Merced County Sheriff Vern Warnke told The Associated Press Thursday.

He was treated at a hospital before being taken to jail. Warnke had said detectives were also seeking a person of interest believed to be his accomplice.

Relatives of the victims and fellow members of the Punjabi Sikh community were shocked by the killings.

Jaspreet Kaur, Amandeep Singh’s widow, said in a GoFundMe fundraiser that her husband and his brother had been in the United States for 18 years and supported not only their families in California but also their elderly parents back in India.

“This is the story of our shared American dream gone wrong,” she wrote. “Our loving family was violently taken away from us on October 3rd.” 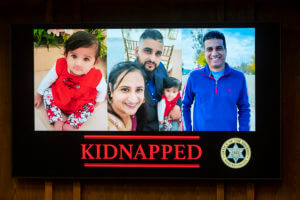 Images are displayed of 8-month-old Aroohi Dheri, left, with her mother Jasleen Kaur, her father Jasdeep Singh, and her uncle Amandeep Singh, at a news conference in Merced, Calif., on Wednesday, Oct. 5, 2022. Sheriff Vern Warnke, of Merced County, announced Wednesday that the family members, who were kidnapped at gunpoint from their trucking business in central California, have been found dead. (Andrew Kuhn/The Merced Sun-Star via AP)

Kaur said her husband routinely donated food to the local food bank and never missed Sunday service in the local Sikh temple. They had a 9-year-old daughter and an 8-year-old son.

The baby’s parents married three years ago in India and reunited two years ago after her mother immigrated to the U.S., she said.

At a vigil Thursday evening in downtown Merced, hundreds of people held lit candles and formed a circle around enlarged photos of the victims. Religious leaders of different faiths opened the ceremony with prayers for the family, the Merced Sun-Star reported.

“Tonight was the community coming together and showing the Singh family that ‘we’re here with you and we will be here with you for as long as you need us, and we will remember the names of those we lost,’” family friend Priya Lakireddy told the newspaper.

The city of Merced, where the family lived and had their trucking business, will hold evening vigils in their memory through Sunday.

The older Salgado was previously convicted of first-degree robbery with the use of a firearm in Merced County, attempted false imprisonment and an attempt to prevent or dissuade a victim or witness after he held a family he had worked for at gunpoint and forced them to follow his orders nearly 20 years ago. 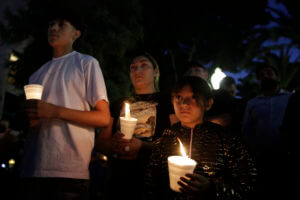 Monserrat Herrera, right, 8, Yubicela Sanchez, center, and Christopher Herrera, left, 17, attend a candlelight vigil for the Singh family at Bob Hart Square in Merced, Calif., on Thursday, Oct. 6, 2022. Four members of the Singh family were abducted and killed this week. The suspect in the kidnapping and killings of an 8-month-old baby, her parents and an uncle had worked for the family’s trucking business and had a longstanding feud with them that culminated in an act of “pure evil,” a sheriff said Thursday. (Salgu Wissmath/San Francisco Chronicle via AP)

Salgado worked for the family’s trucking company but was fired in 2004 because the family suspected him of stealing money, members of the family told the Los Angeles Times.

On the night of Dec. 19, 2005, he showed up at their home wearing a mask and held a gun to the father’s head and bounded his hands with duct tape, recalled his daughter Katrina, who was 16 years old at the time and asked the newspaper to not use her last name.

Salgado rounded up the family, as well as a friend of Katrina’s who was visiting, and took them to the garage, where the family kept a safe with cash and jewelry, she and her mother, Kathy, said.

“I was so scared,” Kathy said. “And I expected to hear the shot as soon as it was open.”

After robbing them, even taking Kathy’s wedding ring, Salgado then led the family to the pool in the backyard and made them jump in as he escaped, Kathy and Katrina recalled. He was caught just a few days later after the family reported him to police.

In 2007, he was sentenced to 11 years in state prison in that case. He was released in 2015 and discharged from parole three years later, according to the California Department of Corrections and Rehabilitation. He also has a conviction for possession of a controlled substance, the department said.

Relatives of Salgado contacted authorities and told them he had admitted to them his involvement in the kidnapping Monday in Merced. Salgado tried to take his own life before police arrived at a home in nearby Atwater where an ATM card belonging to one of the victims was used after the kidnapping.

The victims were Punjabi Sikhs, a community that has a significant presence in the trucking business in central California where many of them drive trucks, own trucking companies or own other businesses associated with trucking.

Public records show the family owns Unison Trucking Inc. and relatives said they had opened an office in the last few weeks in a parking lot the Singh brothers also operated. The feud with Salgado dated back a year, the sheriff said, and “got pretty nasty” in text messages or emails. Other details about Salgado’s employment and the nature of the dispute were not immediately available.

Warnke said he believes the family was killed shortly after being kidnapped from their business. A farmworker found their bodies Wednesday near the town of Dos Palos, about 30 miles (50 kilometers) south of Merced. 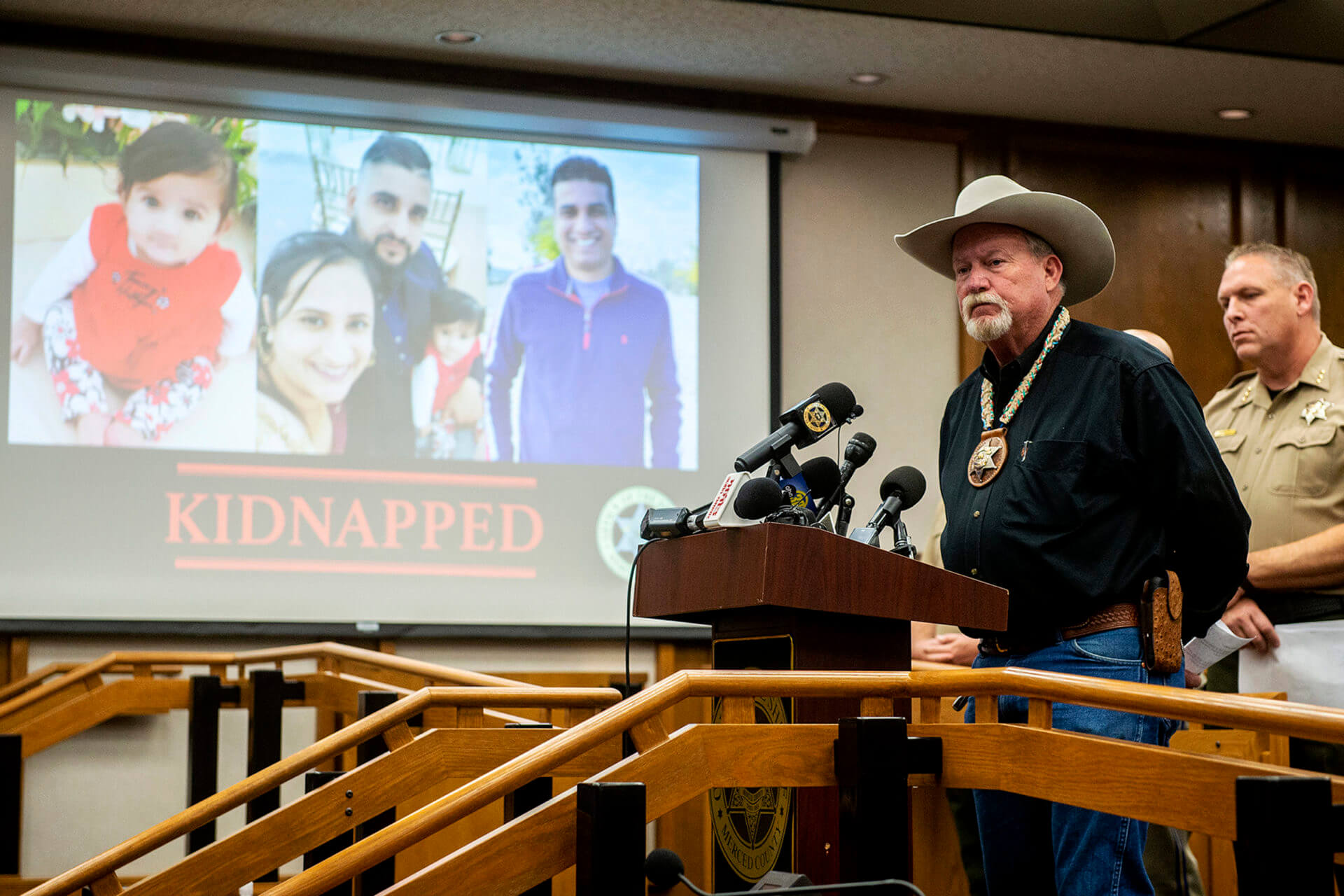 Merced County Sheriff Vern Warnke speaks at a news conference about the kidnapping of 8-month-old Aroohi Dheri, her mother Jasleen Kaur, her father Jasdeep Singh, and her uncle Amandeep Singh, in Merced, Calif., on Wednesday, Oct. 5, 2022. Relatives of the family kidnapped at gunpoint from their trucking business in central California pleaded for help Wednesday in the search for an 8-month-old girl, her mother, father and uncle, who authorities say were taken by a convicted robber who tried to kill himself a day after the kidnappings. (Andrew Kuhn/The Merced Sun-Star via AP)
MORE NEWS