ROSTHERN, Saskatchewan (AP) — The last suspect in a horrific stabbing rampage that killed 10 and wounded 18 in western Canada is dead following his capture, and police hope the stunning end to a gripping hunt that stretched into a fourth day will bring some peace to victims’ families.

One official said Myles Sanderson, 32, died from self-inflicted injuries Wednesday after police forced the stolen car he was driving off a highway in Saskatchewan. Other officials declined to discuss how he died, but expressed relief the final suspected killer was no longer on the loose.

“This evening our province is breathing a collective sigh of relief,” Assistant Commissioner Rhonda Blackmore, commander of the Royal Canadian Mounted Police in Saskatchewan, said at a news conference Wednesday night.

The other suspect, Sanderson’s 30-year-old brother, Damien Sanderson, was found dead Monday near the scene of the bloody knife attacks inside and around the James Smith Cree First Nation reserve early Sunday. Both men were residents of the Indigenous reserve.

Blackmore said Myles Sanderson was cornered as police units responded to a report of a stolen vehicle being driven by a man armed with a knife. She said officers forced Sanderson’s vehicle off the road and into a ditch. He was detained and a knife was found inside the vehicle, she said.

Sanderson went into medical distress while in custody, Blackmore said. She said CPR was attempted on him before an ambulance arrived, and emergency medical personnel then took him to a hospital, where he was pronounced dead.

“All life saving measures that we are capable of were taken at that time,” she said.

Blackmore gave no details on the cause of death. “I can’t speak to the specific manner of death,” she said. 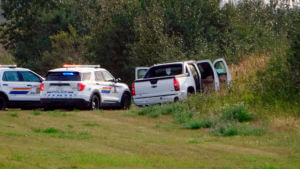 Police and investigators are seen at the side of the road outside Rosthern, Saskatchewan on Wednesday, Sept. 7, 2022. Canadian police arrested the second suspect in the stabbing deaths of 10 people in the province of Saskatchewan on Wednesday after a three-day manhunt during which they had found the body of his brother. (Kelly Geraldine Malone/The Canadian Press via AP)

But an official, who spoke on condition of anonymity, earlier said Sanderson died of self-inflicted injuries, without giving any further details.

Video and photos from the scene showed a white SUV off to the side of the road with police cars all around. Air bags had deployed in the SUV. Some photos and video taken from a distance appeared to show Sanderson being frisked.

An independent investigation by members of Saskatchewan’s Serious Incident Response Team went to the arrest site and will review Sanderson’s death and police conduct.

The federal public safety minister, Marco Mendicino, also stressed that the events will be investigated.

“You have questions. We have questions,” he told reporters during a Cabinet retreat in Vancouver, British Columbia, adding: “There will be two levels of police who will be investigating the circumstances of Myles Sanderson’s death.”

His death came two days after the body of Damien Sanderson was found in a field near the scene of the knife rampage. Police are investigating whether Myles Sanderson killed his brother.

Blackmore said that with both men dead, authorities will find it hard to figure out what set off the rampage.

“Now that Myles is deceased we may never have an understanding of that motivation,” she said.

But she said she hoped the families of the stabbing victims will find some comfort that neither of the Sandersons remains a threat.

“I hope that this brings them closure. I hope they can rest easy knowing that Myles Sanderson is no longer a threat to them.” 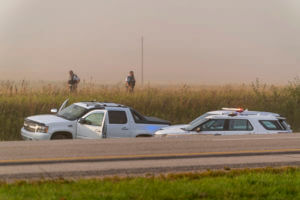 Police and investigators gather at the scene where a stabbing suspect was arrested in Rosthern, Saskatchewan on Wednesday, Sept. 7, 2022. Canadian police arrested Myles Sanderson, the second suspect in the stabbing deaths of multiple people in Saskatchewan, after a three-day manhunt that also yielded the body of his brother fellow suspect, Damien Sanderson.(Heywood Yu/The Canadian Press via AP)

Some family members of the victims arrived at the scene Wednesday, including Brian Burns, whose wife and son were killed.

“Now we can start to heal. The healing begins today, now,” he said.

The stabbings raised questions of why Myles Sanderson — an ex-con with 59 convictions and a long history of shocking violence — was out on the streets in the first place.

He was released by a parole board in February while serving a sentence of over four years on charges that included assault and robbery. But he had been wanted by police since May, apparently for violating the terms of his release, though the details were not immediately clear.

His long and lurid rap sheet also showed that seven years ago, he attacked and stabbed one of the victims killed in Sunday’s stabbings, according to court records.

Mendicino, the public safety minister, has said there will be an investigation into the parole board’s assessment of Sanderson.

“I want to know the reasons behind the decision” to release him, Mendicino said. “I’m extremely concerned with what occurred here. A community has been left reeling.”

Authorities would not say if the victims might be related.

Mark Arcand said his half sister Bonnie and her son Gregory were killed.

“Her son was lying there already deceased. My sister went out and tried to help her son, and she was stabbed two times, and she died right beside him,” he said. “Right outside of her home she was killed by senseless acts. She was protecting her son. She was protecting three little boys. This is why she is a hero.” 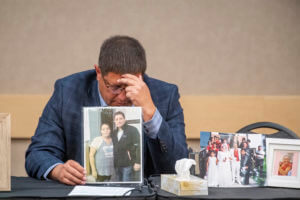 Mark Arcand, who’s sister Bonnie Burns and nephew Gregory “Jonesy” Burns were killed during a series of violence attacks at James Smith Cree Nation speaks to media at a press conference while holding a photo in Saskatoon on Wednesday, Sept. 7, 2022. Myles Sanderson, 32, and his brother Damien, 30, are accused of killing 10 people and wounding 18 in a string of attacks across an Indigenous reserve and in the nearby town of Weldon. Damien was found dead Monday, and police were investigating whether his own brother killed him. (Liam Richards /The Canadian Press via AP)

Arcand rushed to the reserve the morning of the rampage. After that, he said, “I woke up in the middle of the night just screaming and yelling. What I saw that day I can’t get out of my head.”

As for what set off the violence, Arcand said: “We’re all looking for those same answers. We don’t know what happened. Maybe we’ll never know. That’s the hardest part of this.”

Many of Sanderson’s crimes were committed when he was intoxicated, according to court records. He told parole officials at one point that substance use made him out of his mind. Records showed he repeatedly violated court orders barring him from drinking or using drugs.

Many of Canada’s Indigenous communities are plagued by drugs and alcohol.

Myles Sanderson’s childhood was marked by violence, neglect and substance abuse, court records show. Sanderson, who is Indigenous and was raised on the Cree reserve, population 1,900, started drinking and smoking marijuana at around 12, and cocaine followed soon after.

In 2017, he barged into his ex-girlfriend’s home, punched a hole in the door of a bathroom while his two children were hiding in a bathtub and threw a cement block at a vehicle parked outside, according to parole documents.

He got into a fight a few days later at a store, threatening to kill an employee and burn down his parents’ home, documents said.

That November he threatened an accomplice into robbing a fast-food restaurant by clubbing him with a gun and stomping on his head. He then stood watch during the holdup.

In 2018, he stabbed two men with a fork while drinking and beat someone unconscious. 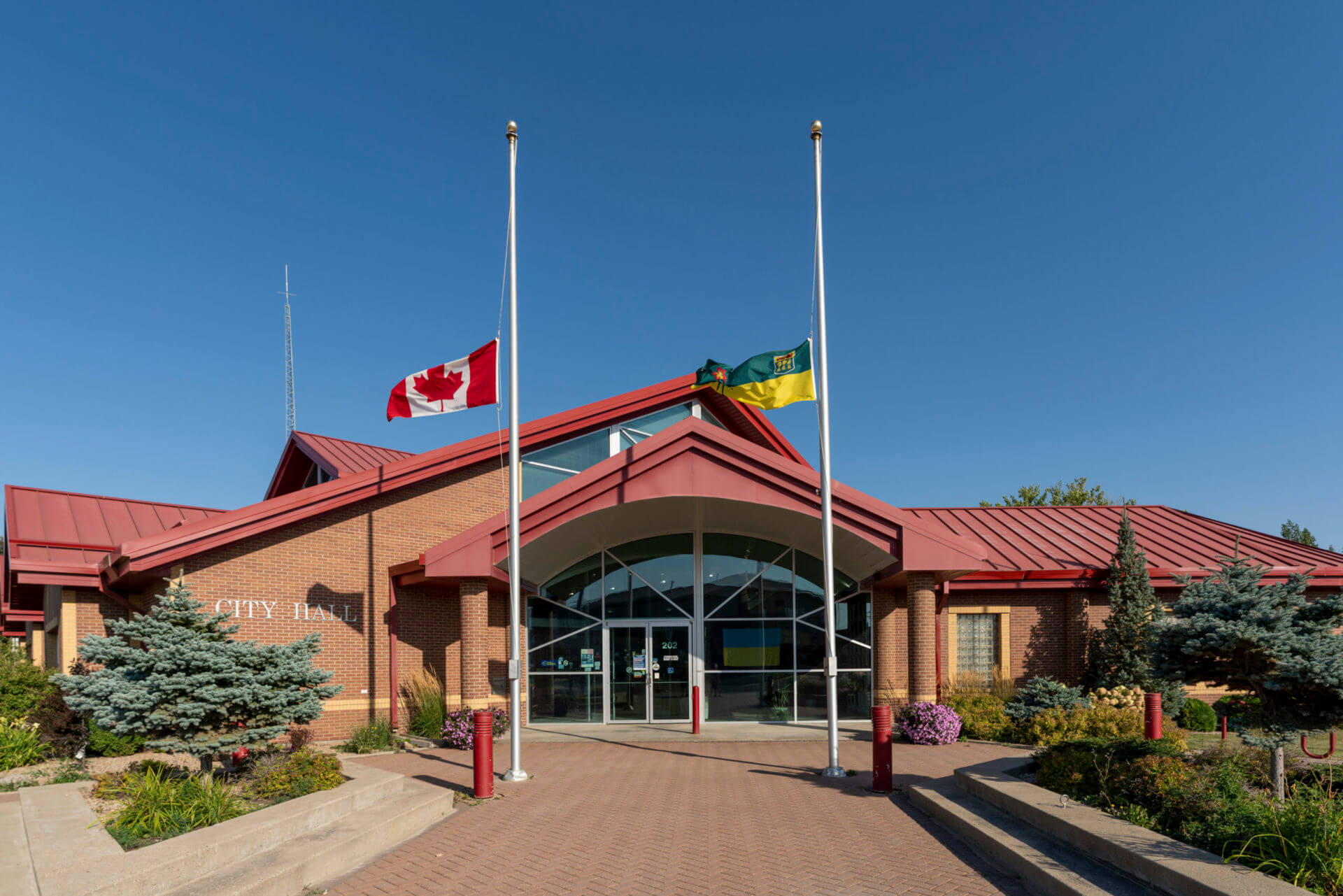 The flag of Canada and the flag of Saskatchewan are at half-mast to show respect to the victims of the stabbing rampage that happened at James Smith Cree Nation and Welton at the City Hall of Melfort in Saskatchewan, on Wednesday, Sept. 7, 2022. (Heywood Yu/The Canadian Press via AP)
MORE NEWS