LAS VEGAS (KTNV) — Nevada Assembly candidate LaJuana Clark, 47, was arrested for robbing a bank in Las Vegas, according to an arrest report from the Las Vegas Metropolitan Police Department.

According to ballotpedia.org, Clark is running as a Democrat for Nevada Assembly District 3. 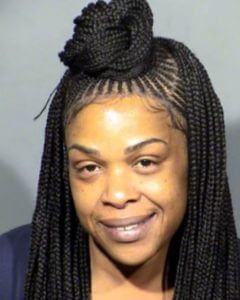 Police say video from inside the bank shows a woman, since identified as Clark, was seen approaching a teller at the Chase Bank on Saturday April 16. Video shows her pass the teller a note stating he had an untraceable firearm, wanted $888, and that she was the victim of a crime, the report states.

The Teller gave Clark $1,000 in various denominations before Clark exited the bank with the money, police stated.

Police said Clark signed her name on the note and included an address she claimed was hers.

With that information and help from her Facebook profile, police said they identified Clark as the suspect. Surveillance video taken from her apartment complex also showed her leaving and returning during the time frame when the bank was robbed, the report states.

She was arrested at her apartment, and investigators got a warrant to search the home. Inside, they say they found a brown purse containing $1,000 in various denominations.

In an interview with detectives, Clark admitted to committing the robbery, the report states. Police say she also wrote an apology letter to the bank teller.

Clark was scheduled to appear in court at 9 a.m. on May 3. She faces one count of robbery and one count of burglary of a business. Her bail is set at $10,000.

This story was originally published April 20, 2022 by KTNV in Las Vegas, an E.W. Scripps Company.