A New Jersey gym owner who punched a police officer during the Jan. 6 attack on the U.S. Capitol was sentenced Wednesday to more than three years in prison, a likely benchmark for dozens of other rioters who engaged in violence that day.

Scott Fairlamb, 44, was the first person to be sentenced for assaulting a law enforcement officer during the Capitol riot. His 41-month prison term is the longest among 32 riot-related sentences handed down so far. 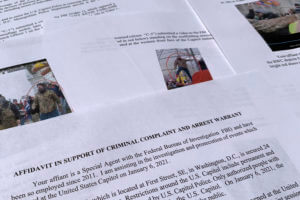 FILE – The affidavit from the FBI in support of an arrest warrant for Scott Kevin Fairlamb is photographed on Aug. 6, 2021. Fairlamb, a New Jersey gym owner who punched a police officer during the Jan. 6 attack on the U.S. Capitol is scheduled to be sentenced on Wednesday, Nov. 10. (AP Photo/Jon Elswick, File)

Fairlamb’s punishment likely will guide other judges who sentence rioters who clashed with police at the Capitol. U.S. District Judge Royce Lamberth said it was significant that his sentencing of Fairlamb was the first for assaulting an officer, with more guilty pleas likely in the coming months.

Lamberth said Fairlamb’s actions struck at “the heart of our democracy.” He had pleaded guilty, avoiding a trial.

Fairlamb, a boxing coach and former mixed martial arts fighter, apologized and expressed remorse for actions that he described as irresponsible and reckless.

Justice Department prosecutors recommended a prison sentence of three years and eight months for Fairlamb, saying he was among the first rioters to breach the Capitol and incited others to be violent.

Other defendants are soon to face sentencing, including the shirtless rioter who called himself the “QAnon Shaman.” Jacob Chansley, who wore face paint and a furry hat with horns when he stormed the Capitol, became “the public face of the Capitol riot.” prosecutors said in a court filing late Tuesday. They recommended a longer prison sentence, four years and three months, when the Arizona man is sentenced next Wednesday.

Prosecutors argue Chansley armed himself with a six-foot spear, used his bullhorn to rile up other rioters, spewed threats in the Senate gallery and left a threatening note for then-Vice President Mike Pence, they noted. Unlike Fairlamb, Chansley isn’t accused of physically assaulting anyone.

Fairlamb joined a group of rioters who pushed through a line of police officers and metal barricades on the Capitol’s West Terrace. He recorded a video of himself shouting, “What (do) patriots do? We f——— disarm them and then we storm the f——— Capitol!”

Fairlamb carried a police baton into the Capitol, then left the building and approached several Metropolitan Police Department officers, screaming as he followed them. Fairlamb shoved one of the officers and punched his face shield.

The officer wasn’t injured but described Jan. 6 as the scariest day of his career, Assistant U.S. Attorney Leslie Goemaat told the judge.

Two days after the riot, Fairlamb said on a video that “they pulled the pin on the grenade, and the blackout is coming. What a time to be a patriot,” according to prosecutors.

Fairlamb pleaded guilty to obstruction of an official proceeding and assaulting the police officer. Sentencing guidelines calculated by the court’s probation department recommend a term of imprisonment ranging from 41 to 51 months.

Defense attorney Harley Breite asked for Fairlamb to be sentenced to 11 months imprisonment, about how long he has been jailed since his Jan. 22 arrest at his home in Stockholm, New Jersey.

Fairlamb owned Fairlamb Fit gym in Pompton Lakes, New Jersey, but it closed after his arrest. He is the brother of a Secret Service agent who was assigned to protect former first lady Michelle Obama, according to Breite.

Fairlamb’s social media posts indicate that he subscribed to the QAnon conspiracy theory and promoted a bogus claim that former President Donald Trump would become the first president of “the new Republic” on March 4, prosecutors said.

Fairlamb feels that he was “duped by social media,” his lawyer said in a court filing.

“Epiphanies are rare but it certainly didn’t take Mr. Fairlamb long to realize that his previous line of thinking was incorrect,” Breite wrote. 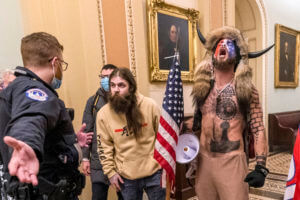 FILE – Jacob Chansley, right with fur hat, during the Capitol riot in Washington, Jan. 6, 2021. Chansley armed himself with a six-foot spear, used his bullhorn to rile up other rioters, spewed threats in the Senate gallery and left a threatening note for then-Vice President Mike Pence, prosecutors noted in a court filing late Tuesday, Nov. 9. (AP Photo/Manuel Balce Ceneta, File)

More than 100 law enforcement officers were injured during the riot, according to prosecutors. Capitol Police Officer Brian Sicknick collapsed and died after rioters sprayed him with a chemical irritant.

Over 650 people have been charged with federal crimes related to the Jan. 6 riot, including more than 100 accused of assaulting law enforcement officers. More than 120 defendants have pleaded guilty, mostly to misdemeanors that carry a maximum of six months imprisonment.

Before Fairlamb’s sentencing, the longest sentence for a Capitol rioter was eight months, for a Florida man who breached the Senate chamber carrying a Trump campaign flag. A Texas man who posted threats connected to Jan. 6 but didn’t storm the Capitol was sentenced to 14 months in prison.

Chansley, who pleaded guilty in September to felony obstruction of an official proceeding, has spent more than 300 days in jail. He is seeking a time-served sentence.

His lawyer compared Chansley to Forrest Gump, the movie character played by Tom Hanks, and claimed he was oblivious to much of what transpired at the Capitol. His attorney also said Chansley has longstanding mental health problems and suffered from being held in solitary confinement due to COVID-19 protocols.
___
Kunzelman reported from College Park, Maryland, and Billeaud reported from Phoenix.