SANTA ANA, Calif. (AP) — A heated exchange between rapper Cardi B and the lawyer for a man suing her for copyright infringement got so intense Wednesday that the judge briefly stopped the trial.

The Grammy winner delivered pointed answers to several questions by attorney A. Barry Cappello, who is representing a man who claims the rapper misused his likeness on the cover of a 2016 mixtape. 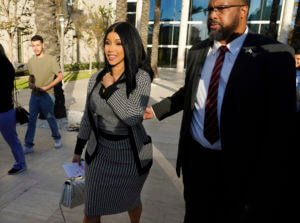 Cardi B exits federal court as proceedings continue in a $5 million copyright infringement lawsuit against her in federal court, Wednesday, Oct. 19, 2022, in Santa Ana, Calif. Kevin Michael Brophy is suing the Grammy-winning musician for allegedly misusing his likeness for her sexually suggestive mixtape cover art in 2016. (AP Photo/Chris Pizzello)

The testy back-and-forth between the Cappello and the star witness prompted U.S. District Judge Cormac Carney to send jurors out of the Santa Ana, California courtroom and tell both sides he was considering a mistrial. After a break, he called the arguing “unprofessional” and “not productive” but allowed questioning to resume – placing new restrictions for both sides.

Kevin Michael Brophy is seeking $5 million from Cardi B over the appearance of some of his distinctive back tattoos on the mixtape’s artwork, which shows a tattooed man from behind with his head between the rapper’s legs.

The rapper said she felt Brophy hadn’t suffered any consequences as a result of the artwork, yet has harassed her legally for five years. At one point she said she missed a special moment with her youngest child, who recently turned 1-year-old.

“I have empathy for people,” she said. “I care about people. I feel like I’m being taken advantage of. I missed my child’s first step by being here.”

Brophy told jurors Tuesday that he felt “humiliated” by the racy artwork.

At one point, Cardi B pointed out that the man’s face cannot be seen in the artwork. Capello asked her to calm down, but she instead barked back at the lawyer’s contention that she knew about photo-editing software used to put Brophy’s tattoos – which have been featured in magazines – on another model’s body.

“It’s not your client’s back,” she said about the image, which features a Black model. Brophy is white. The rapper said she posted a photo of the “famous Canadian model” on her social media.

Cardi B, whose real name is Belcalis Almanzar, said an artist used only a “small portion” of the tattoos without her knowledge. She had previously said the cover art – created by Timm Gooden — was transformative fair use of Brophy’s likeness.

Cappello said Gooden was paid $50 to create a design but was then told to find another tattoo after he turned in an initial draft. He said Gooden googled “back tattoos” before he found an image and pasted it on the cover. 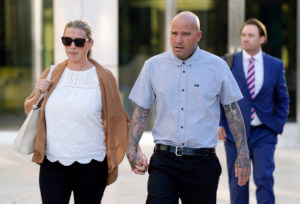 Cardi B’s lawyer, Peter Anderson, said Brophy and the mixtape image are unrelated, noting the model did not have neck tattoos, which Brophy does.

“It’s not him,” the rapper said. “To me, it doesn’t look like his back at all. The tattoo was modified, which is protected by the First Amendment.”

She said the image hasn’t hindered Brophy’s employment with a popular surf and skate apparel brand or his ability to travel the world for opportunities.

“He hasn’t gotten fired from his job,” said Cardi B, who implied that the mixtape was not a lucrative one for her. “He hasn’t gotten a divorce. How has he suffered? He’s still in a surf shop at his job. Please tell me how he’s suffered.”

Brophy, a self-described family man, said he sent a cease-and-desist letter to Cardi B’s representatives to remove the image, but he never received a response. The rapper said she hadn’t seen the letter.

At one point, Cardi B said she doesn’t check her mailbox because that’s for “old people” – leading some in the courtroom to chuckle.

When Cardi B left the courthouse, she was swarmed by around 30 high schoolers who were attempting to take selfies with her. As the rapper walked toward her vehicle with security, she smiled and waved before telling them she would be more responsive after the trial.

Last month, Cardi B pleaded guilty to a criminal case stemming from a pair of brawls at New York City strip clubs that required her to perform 15 days of community service. Earlier this year, the rapper was awarded $1.25 million in a defamation lawsuit against a celebrity news blogger who posted videos falsely stating she used cocaine, had contracted herpes and engaged in prostitution.