NEW YORK (AP) — At a small patch of Central Park flanking the city’s Harlem neighborhood, scores came Monday to remember the injustice that imprisoned five Black and Latino teenagers after they were wrongly accused and convicted of the 1989 rape of a white jogger.

They arrived in the chill of a late fall morning, some singing hymns, to dedicate a park entry to the men once known as the Central Park Five, but now remembered as the Exonerated Five. 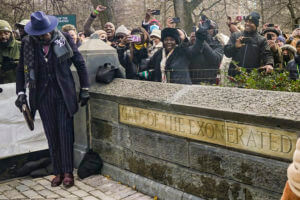 A crowd cheers as Yusef Salaam, left, one of five men exonerated after being wrongfully convicted as teenagers for the 1989 rape of a jogger in Central Park, looks at the plaque with the words “Gate of the Exonerated,” unveiled during a naming ceremony for the northeast gateway of Central Park, Monday Dec. 19, 2022, in New York. The entrance was named to honor Salaam, Kevin Richardson, Raymond Santana Jr., Antron McCray, Korey Wise — the five men exonerated in the case. (AP Photo/Bebeto Matthews)

The entryway, located on the northern perimeter of the park between Fifth Avenue and Malcolm X Boulevard, will be known as the “Gate of the Exonerated.” It commemorates the miscarriage of justice that not only befell the five men, organizers say, but the unknown others who might have been wrongly imprisoned.

“This is a moment. This is legacy time,” said one of the men, Yusef Salaam.

“We are here because we persevere,” he said to a cheering crowd.

Monday was the first time Raymond Santana, another of the men, now deep in his 40s, has returned to Central Park since that fateful day 33 years ago.

“We were babies, who had no dealing with the law. Never knew what Miranda was,” said Santana, as he recounted a time of confusion when police rustled him up and began interrogating him.

Santana was 14 and Salaam was 16 when they and three others — Kevin Richardson, 14; Korey Wise, 16; and Antron McCray, 15 — were wrongly tried for the rape of a 28-year-old woman, whose brutal attack left with her with permanent injuries and no memory of the assault. The high-profile incident prompted police to round up Black and Brown men and boys in connection with the rape. 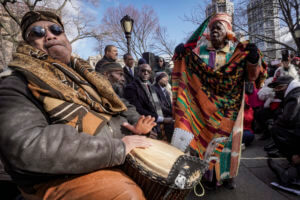 Matias Reyes, a murderer and serial rapist already in prison, would later confess to the crime.

Soon after, the convictions of the Central Park Five were thrown out in 2002 after the men served six to 13 years in prison.

“It needs to be known what we went through. We went to hell and back,” said Richardson. “We have these scars that nobody sees.”

The three men — Wise and McCray could not attend — spoke about how the criminal justice system is stacked against people of color.

The gate, they said, would stand as reminder of the injustice of the past but also of those still being committed today.

“This is an important time right here — the Gate of the Exonerated, this is for everybody,” Richardson said. “Everybody that’s been wronged by cops.”

The modest remembrance — words etched in stone on a waist-high wall — was years in the making. 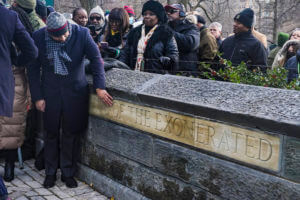 Raymond Santana Jr., left, one of five men exonerated after being wrongfully convicted as teenagers for the 1989 rape of a jogger in Central Park, moves his hand over the words “Gate of the Exonerated” during a naming ceremony for the northeast gateway of Central Park, Monday, Dec. 19, 2022, in New York. The entrance was named to honor Santana, Kevin Richardson, Yusef Salaam, Antron McCray, Korey Wise — the five men exonerated in the case. (AP Photo/Bebeto Matthews)

Other entrances to the park have been labeled to reflect groups of people who live and work in the city, with names like Artisans’ Gate, Scholars’ Gate and Strangers’ Gate.

Mayor Eric Adams, who was just starting his career as a New York City police officer during the 1989 incident, arrived to the ceremony to pay tribute to the men.

“To these soldiers here, you personify the black male experience,” the mayor said, addressing the men.

“The truth is we shouldn’t be here today,” he said, alluding to past mistakes.