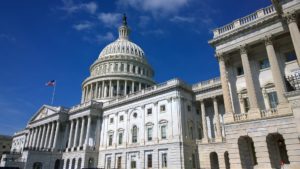 WASHINGTON (AP) — The CEOs of technology giants Facebook, Google and Twitter are expected to testify for an Oct. 28 Senate hearing on tech companies’ control over hate speech and misinformation on their platforms.

The Senate Commerce Committee voted last week to authorize subpoenas for Facebook CEO Mark Zuckerberg, Sundar Pichai of Google and Twitter’s Jack Dorsey to force them to testify if they didn’t agree to do so voluntarily. Spokespeople for the companies said Monday that the CEOs will cooperate.

The hearing “must be constructive and focused on what matters most to the American people: how we work together to protect elections,” Twitter said in a tweet in its policy channel.

The hearing will come less than a week before Election Day. It marks a new bipartisan initiative against Big Tech companies, which have been under increasing scrutiny in Washington and from state attorneys general over issues of competition, consumer privacy and hate speech.

The executives’ testimony is needed “to reveal the extent of influence that their companies have over American speech during a critical time in our democratic process,” said Sen. Roger Wicker, a Mississippi Republican who heads the Commerce Committee. 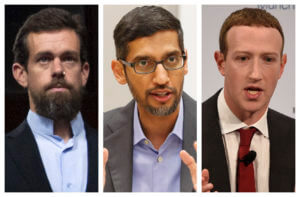 Facebook, meanwhile, is expanding restrictions on political advertising, including new bans on messages claiming widespread voter fraud. The new prohibitions laid out in a blog post came days after President Donald Trump raised the prospect of mass fraud in the vote-by-mail process during a debate last week with Democratic rival Joe Biden.

With Trump leading the way, conservative Republicans have kept up a barrage of criticism of Silicon Valley’s social media platforms, which they accuse without evidence of deliberately suppressing conservative views.

The Justice Department has asked Congress to roll back long-held legal protections for online platforms, putting down a legislative marker in Trump’s drive against the social media giants. The proposed changes would strip some of the bedrock protections that have generally shielded the companies from legal responsibility for what people post on their platforms.

Trump signed an executive order earlier this year challenging the protections from lawsuits under a 1996 telecommunications law that has served as the foundation for unfettered speech on the internet.

Democrats, on the other hand, have focused their criticism of social media mainly on hate speech, misinformation and other content that can incite violence or keep people from voting. They have criticized Big Tech CEOs for failing to police content, homing in on the platforms’ role in hate crimes and the rise of white nationalism in the U.S.