BROOKLYN CENTER, Minn. (AP) — The Minneapolis suburb where Black motorist Daunte Wright was killed by an officer in April has enacted its first step in a plan to change policing in the city.

Brooklyn Center announced Tuesday that officers are now instructed to release people who are cited for low-level crimes and can only take them into custody if required by law, which would include cases of felonies or if someone poses a threat to themselves, the public or to property. The policy also requires officers to attempt to deescalate situations. 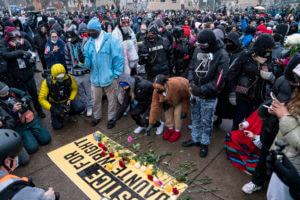 Flowers are placed on a banner as demonstrators gather outside the Brooklyn Center Police Department on Tuesday, April 13, 2021, to protest the shooting death of Daunte Wright on Sunday during a traffic stop in Brooklyn Center, Minn. (AP Photo/John Minchillo)

“Today we are taking another step forward in our collective work to reimagining public safety in Brooklyn Center,” Mayor Mike Elliott said. “This step moves us closer to ensuring there is more equity in how we conduct public safety.”

The citation and release policy is part of a city resolution to change policing, passed about a month after Wright was killed by an officer who said she meant to use her Taser instead of her handgun. The policy is aimed at keeping people who can’t afford bail out of jail if they are stopped for a minor traffic infraction, the Star Tribune reported.

“Many people of color — particularly Black men — carry trauma from an experience, or many, when being pulled over by the police,” said City Council member Marquita Butler. “This policy is important and needed to ensure we don’t have any more deaths as a result of minor traffic infractions.”

The city said it will continue to work on implementing other aspects of its plan to change policing, including a plan to use unarmed civilians to handle minor traffic violations. That proposal was among several that had been criticized by law enforcement.