Cohen said he had been “ordered not to disclose” any of the people present at the meeting or to discuss prosecutors’ area of interest in any detail. 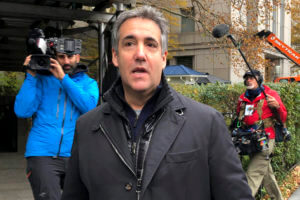 “I have tremendous confidence in the team that I met with yesterday, as well as their depth and knowledge regarding this and other matters,” Cohen said.

No charges were brought against Trump during the tenure of former Manhattan District Attorney Cyrus Vance Jr., who shifted the probe’s focus to the Trump Organization’s business practices. The company was convicted of tax fraud last month and fined $1.6 million.

After that conviction, Vance’s successor, District Attorney Alvin Bragg, said its Trump investigation was moving to the “next chapter,” but he offered no specifics on where it was headed next.

Focusing again on hush money payments would be bringing the probe full circle.

A message seeking comment was left with the Manhattan district attorney’s office.

Bragg, a Democrat, has shown renewed interest in pursuing more charges, possibly against Trump himself. He has also shown concern about revealing too much about the probe, saying that acknowledging or disclosing certain details could harm a potential case.

On Wednesday, Bragg’s office sent a letter to Mark Pomerantz, the former prosecutor who once oversaw the office’s Trump inquiries, and his publisher Simon & Schuster, raising concerns that his book’s slated publication next month could “materially prejudice ongoing criminal investigations.”

Bragg’s office said Pomerantz failed to receive required authorization before writing the book, “People v. Trump, An Inside Account” and that he could be committing a crime if he was “unlawfully converting confidential government information for his personal advantage.” The office is seeking to review the manuscript before publication.

In a statement, Pomerantz said: “I am confident that all of my actions with respect to the Trump investigation, including the writing of my forthcoming book, are consistent with my legal and ethical obligations.”

As for Cohen, he met with Manhattan prosecutors earlier in the investigation more than a dozen times, including three times while serving a federal prison sentence. Tuesday’s session was his first since Bragg took office last year.

Bragg, told The Associated Press in a recent interview that his office’s investigation into Trump and his businesses is continuing and that no decision has been made on whether to charge the former president.

“We’re going to follow the facts and continue to do our job,” Bragg said.

Trump, a Republican, has decried the probe as politically motivated.

Bragg said the investigation slowed while the Trump Organization case was playing out, in part because he did not want to prejudice the trial or give rise to defense mistrial motions.

“Now with the trial having ended, we are now moving on to the next chapter, which may allow us to do things that are not 100% covert — may involve reaching out to people outside of the office to gather additional evidence,” Bragg said.

Last month, as the trial was wrapping up, Bragg hired former acting U.S. Assistant Attorney General Matthew Colangelo to lead the Trump investigation and other white collar probes. Bragg and Colangelo worked together on Trump-related matters at the state attorney general’s office.

Manhattan prosecutors have also probed whether Trump misled banks and tax authorities about the value of assets, an issue Cohen raised while testifying before Congress in 2019. That matter is now the subject of a civil lawsuit brought by New York Attorney General Letitia James.