LONDON (AP) — In a legal showdown between soccer spouses that mixed celebrity, social media and amateur sleuthing, a judge has ruled whodunnit. 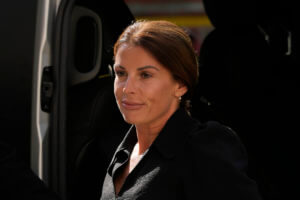 In a devastating blow to Vardy, who launched the libel suit to defend her reputation, the judge said Rooney’s allegation was “substantially true.” Steyn said it was likely that Vardy’s agent, Caroline Watt, had passed Rooney’s private information to The Sun newspaper, and that ”Mrs. Vardy knew of and condoned this behavior.”

Vardy, who sued after Rooney accused her in 2019 of sharing private Instagram content with The Sun, said she was “extremely sad and disappointed at the decision.”

Rooney said she was pleased with the verdict, but added that “it was not a case I ever sought or wanted.”

“I never believed it should have gone to court at such expense in times of hardship for so many people when the money could have been far better spent helping others,” she said in a statement.

The case, heard at the High Court in May, was a media sensation. The women are celebrities in their own right, and both are married to famous footballers: Vardy to Leicester City and England striker Jamie Vardy, Rooney to former Manchester United and England star Wayne Rooney.

Then there was the amateur detective work that led to Rooney’s accusation. Rooney, 36, has said she purposely posted fake stories on Instagram to find out who was passing her private information to the press. The stories — including one about a fictitious basement flood at the Rooneys’ house and another reporting Coleen Rooney was trying to revive her TV career — duly appeared in The Sun.

Rooney said she had blocked all accounts from seeing her Instagram stories apart from the one she suspected of being the leaker. In an October 2019 social media post to almost 2 million followers, she revealed: “It’s ……………. Rebekah Vardy’s account.” 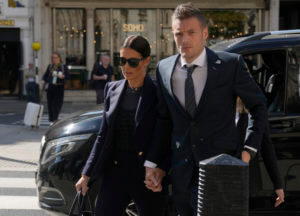 FILE – Leicester City and England soccer player Jamie Vardy, and his wife Rebekah Vardy, arrive together at the High Court in London, Tuesday, May 17, 2022. On Friday, July 29, 2022, Judge Karen Steyn has cleared Coleen Rooney of libeling Vardy when she alleged that Vardy had leaked her private social media posts to the tabloid press. (AP Photo/Alastair Grant, File)

Rooney was dubbed “Wagatha Christie,” a play on the slang term “WAG” — wives and girlfriends of soccer stars — and the name of crime author Agatha Christie.

Vardy, 40, strenuously denied leaking, and sued for libel “to establish her innocence and vindicate her reputation,” her lawyer Hugh Tomlinson said.

The case caused a media frenzy during seven days of hearings as the two women went to court, along with their husbands, despite being urged by judges and legal experts to settle. The case has reportedly cost each side more than 1 million pounds ($1.2 million) in legal fees.

Both women testified during the trial, with Vardy several times breaking down in tears. The judge was scathing about Vardy’s credibility as a witness, saying some of her evidence was “manifestly inconsistent with the contemporaneous documentary evidence, evasive or implausible.” Rooney, in contrast, was “honest and reliable,” the judge said.

Vardy’s agent did not give evidence. Vardy’s lawyers said Watt’s health was too fragile for her to take the stand. Watt’s phone, which was sought by Rooney’s lawyers as evidence, was reported to have fallen into the North Sea.

The judge noted that the chances this was an accident were “slim.”

Media lawyer Jonathan Coad told the BBC the outcome was “an absolute disaster” for Vardy, who “has been effectively branded a liar.” 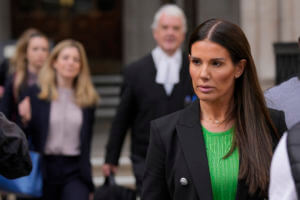 Though the case was treated by the media and much of the public as an entertaining spectacle, the judge noted that it had a human cost.

She said Vardy had faced “vile abuse” from members of the public after Rooney’s post, “including messages wishing her, her family, and even her then-unborn baby, ill in the most awful terms.”

“Nothing of which Mrs. Vardy has been accused, nor any of the findings in this judgment, provide any justification or excuse for subjecting her or her family, or any other person involved in this case, to such vitriol,” Steyn said.

Vardy indicated she would not appeal.

“Please can the people who have been abusing me and my family now stop,” she said. “The case is over.”