SUPERIOR TOWNSHIP, Mich (AP) — Emoni Bates, a former basketball prodigy who transferred to Eastern Michigan from Memphis, was charged with two felonies Monday after police found a gun in a car during a traffic stop.

The 18-year-old Bates failed to stop at an intersection Sunday night and a search turned up the weapon, said Derrick Jackson, a spokesman for the Washtenaw County sheriff’s office. 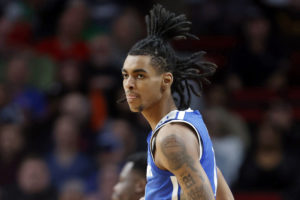 FILE – Then-Memphis forward Emoni Bates looks on during the first half of a first-round NCAA college basketball tournament game against Boise State, on March 17, 2022, in Portland, Ore. Bates has officially transferred to Eastern Michigan. The school announced Tuesday, Aug. 23, 2022, that the 6-foot-9 guard will play for his hometown Eagles this season, nearly two months after Bates shared his plans on social media. (AP Photo/Craig Mitchelldyer, File)

Defense attorney Steve Haney told The Associated Press that the vehicle and the gun didn’t belong to Bates.

“I hope people can reserve judgment and understand there’s a presumption of innocence,” Haney said. “This was not his vehicle. This was not his gun. … We’re still gathering facts, too.”

Bates was charged with carrying a concealed weapon and altering identification marks on a firearm. He was released after his lawyer entered a not guilty plea. Bates’ next court hearing is Oct. 6.

“This is his first brush with the law,” Haney said in court. “He poses no threat or risk to society.”

Less than a month ago, the 6-foot-9 Bates transferred to Eastern Michigan to play for his hometown Eagles. Bates averaged nearly 10 points a game last season as a freshman at Memphis, where he enrolled after reclassifying to skip a year of high school and join the class of 2021.

“We are aware of a situation involving one of our student athletes,” EMU spokesman Greg Steiner said. “We are working to gather more details and will have further comment when more information is available.” 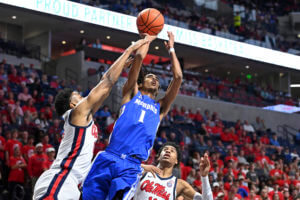 FILE – Then-Memphis forward Emoni Bates (1) takes a shot past Mississippi forward Robert Allen (21) and guard Matthew Murrell (11) during the first half of an an NCAA college basketball game in Oxford, Miss., Saturday, Dec. 4, 2021. Bates has officially transferred to Eastern Michigan. The school announced Tuesday, Aug., 23, 2022, that the 6-foot-9 guard will play for his hometown Eagles this season, nearly two months after Bates shared his plans on social media. (AP Photo/Thomas Graning, File)

Bates was the first sophomore to win the Gatorade national player of the year award in high school basketball in 2020, beating out Cade Cunningham and Evan Mobley. Detroit drafted Cunningham No. 1 overall last year, two spots before Cleveland took Mobley in the 2021 NBA draft.

Bates committed to playing for Tom Izzo at Michigan State two years ago, later de-committed and signed with Memphis. Bates played in 18 games for the Tigers, who finished 22-11 under Penny Hardaway. Bates missed much of the season with a back injury before appearing in Memphis’ two NCAA Tournament games.

In 2019, as a high school freshman, the slender and skilled guard led Ypsilanti Lincoln to a state title and was named Michigan’s Division 1 Player of the Year by The Associated Press. His sophomore season was cut short by the pandemic and he attended Ypsi Prep Academy as a junior, his final year of high school.