EL PASO COUNTY, Colo. (KMGH ) — The El Paso County family found dead from an apparent murder-suicide on Saturday was identified by the El Paso County Coroner’s Office on Monday afternoon. Two children and two adults were killed at a home near Monument. 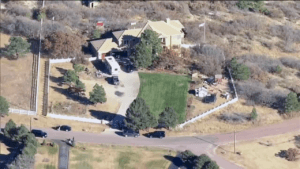 The El Paso County family found dead from an apparent murder-suicide on Saturday was identified by the El Paso County Coroner’s Office on Monday afternoon. Two children and two adults were killed at a home near Monument. (KMGH)

The sheriff’s office confirmed the victims and suspect were husband, wife and kids. The other family members in the home are with family and relatives.

The cause and manner of death for all will be released at a later time.

The El Paso County Sheriff’s Office responded to the family’s home along the 1300 block of Pleier Drive on Saturday morning after receiving a 911 call about somebody seriously injured in the home.

A shelter-in-place order was issued for about two hours as investigators worked to evaluate the evidence at the scene. On Saturday, they said they had found at least one deceased person at the residence.

On Sunday morning, the sheriff’s office said in total, two adults and two children were found deceased in an apparent murder-suicide.

Jerry Hager, a neighbor, said he met the family at church and the situation has been a shock to what he called a peaceful neighborhood. He said the Krebs were always friendly, had three kids of their own and had children who were adopted as well.

“Very nice pleasant folks, so this is kind of shocking that anything like this would happen in their world,” Hager said.

The Academy District 20 confirmed the murder-suicide took place within its district’s borders, however, it could confirm if the children attended school in the district. Allison Cortez, the chief communication officer for Academy District 20, said there will be increased counseling services for students at Discovery Canyon Campus.

The news of an “apparent murder suicide” within our community is heartbreaking. Although we are in contact with local authorities, it is early in their investigation, and we do not have confirmed specifics. But we will be providing supports for our students.

Starting tomorrow morning, we will have counseling for students who are in need. Support is provided by school mental health professionals and trained Academy District 20 crisis counselors.

If a student is in crisis and needs immediate support, please contact your nearest emergency room, behavioral health center or 911.

Moments like these are hard to process and leave us with more questions than answers.  We must therefore come together and provide each other support during this difficult time.

This story was originally published Nov. 1, 2021, by KMGH in Denver, an E.W. Scripps Company.