BRIGHTON, Colo. (KMGH) — A grand jury has indicted the parents of a 1-year-old girl who died of fentanyl poisoning on Jan. 2. 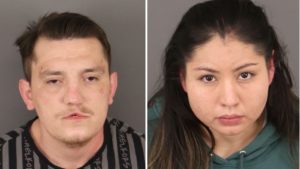 Montoya and Casias allegedly were involved in a drug-trafficking enterprise before, during, and after their child’s death, according to the 17th Judicial District Attorney’s Office.

According to the indictment, Montoya and Casias established, operated and maintained this enterprise as their main form of income.

“A distinguishing feature of the criminal enterprise was the extremely dangerous manner in which Montoya and Casias conducted the drug trafficking activity,” the document reads. “Montoya and Casias operated this criminal enterprise with full knowledge and awareness of the hazardous toxicity of the illegal controlled substances that they were distributing and of the extreme risk of serious harm and/or death to others, including their minor children, from exposure to these hazardous controlled substances.”

The substances were stored at their residence in close proximity to their two children, and the parents “conducted the drug trafficking activities of the criminal enterprise” throughout the day and night, the document reads. Their customers were allowed to use the substances while inside the home, often in front of the children.

On Jan. 1, they received a large amount of illegal controlled substances, including fentanyl, which they kept at their residence, and distributed it throughout the day and evening, while the 1-year-old was in the home, according to the indictment.

“This drug trafficking activity and their related use of illegal controlled substances placed (name redacted) in an extremely dangerous situation, exposed her to highly toxic and hazardous controlled substances containing fentanyl, posing a threat to her life and health, and which ultimately resulted in her death,” the indictment reads.

In the morning of Jan. 2, law enforcement officers responded to the home and found the 1-year-old, who had recently died. A coroner determined she had died of acute fentanyl toxicity after digesting the substance.

The parents were arrested in March.

The grand jury reviewed evidence from the North Metro Drug Task Force, the Brighton Police Department, and the district attorney’s office before deliberating. They issued a true bill — or the grand jury’s written decision to indict a person — on Sept. 8. It was certified the following day by the 17th Judicial District Chief Judge and the district attorney’s office filed the cases in Adams County District Court on Sept. 20.

Originally, on March 30, Montoya and Casias were charged with child abuse resulting in death and distribution of a controlled substance – Schedule I or Schedule II. With this new indictment, both of those cases were dismissed and they both now face the following new charges:

This story was originally published Sept. 22, 2022 by KMGH in Denver, an E.W. Scripps Company.