(KMGH) The Larimer County, Colorado Sheriff’s Office is searching for a 15-year-old suspect following a shooting in Fort Collins Thursday.

Just after 4 p.m., the sheriff’s office received reports of a shooting outside of a home. 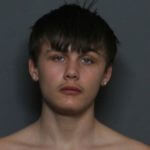 When deputies arrived, they found a 28-year-old man suffering from multiple gunshot wounds. He was taken to a local hospital.

Investigators identified 15-year-old Teagan Pixley-Johnson of Fort Collins as the suspect. Pixley-Johnson and the victim know each other, according to the sheriff’s office.

Pixkley-Johnson is 5 feet 8 inches tall, 130 pounds, with brown hair and blue eyes. He was last seen wearing a black hoodie and black pants.

He is wanted for first degree attempted murder and possession of a handgun by a juvenile. There is also a sentence enhancer of aggravated juvenile offender.

Pixley-Johnson is believed to be armed and dangerous, according to the sheriff’s office.

This story was originally published July 28, 2022 by KMGH in Denver, an E.W. Scripps Company.