In a wheelchair and surrounded by family and friends, Jadah McDaniels held her head high as she entered the Arapahoe County District Court for the sentencing of 19-year-old Manuel Giron.

Jennifer Holland read a letter her daughter, McDaniels, wrote in court. She broke down while she read in front of the judge and looked directly at Giron as she read the letter, calling him weak and selfish. Giron moved his gaze to the floor. 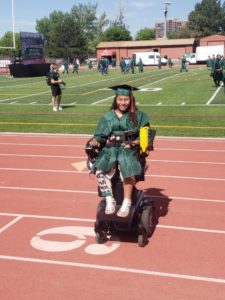 This photo provided to KMGH shows Jadah McDaniels, who was brutally stabbed in September 2020. Her attacker has been sentenced to decades in prison. (KMGH)

“Everything my attacker tried to take away from me, from this senseless and brutal attack, I have back and therefore, (I’m) more powerful than ever,” McDaniels said, as she read her letter outside the district court for KMGH. “I believe that the attempt to have power and control over me will never prevail. I see my attacker as weak, selfish and insignificant.”

On September 10, 2020, McDaniels and Giron met at Sunburst Park in Aurora after both met online. She said they were in his car when he began to make sexual advances, and when she denied, he began to repeatedly stab her. McDaniels recalls trying to escape but he came after her. An affidavit in the case states when a driver stopped to see what was happening, Giron dropped McDaniels and ran her over with his car as he fled the scene. Court documents showcased photos of the punctures on McDaniels clothing the night she was attacked.

Giron read a letter he wrote in court. He apologized and said he can’t imagine what he’s put the victim and her family through. He told the judge he suffers from childhood trauma.

The judge described the attack as “horrific” and Giron’s actions as “predatory.” He asked Giron why he attacked McDaniels.

Giron said he wasn’t himself and was extremely drunk the night of the attack.

The judge sentenced Giron to 60 years in prison for attempted first-degree murder and second-degree kidnapping.

Giron’s mother left the courtroom in tears once the sentencing ended. She said she feels for McDaniels and adds that she’s also hurting because she lost a son.

McDaniels believes Giron regrets his actions but said she’s not ready to forgive him. She feels like the sentencing brought closure to her nightmare, an attack she refuses to let it define her life.

“Even though what he did was extremely terrible and that I’m still recovering from it, it won’t hold me down; I’ll still progress, I’ll still become the vet tech that I hope to be,” McDaniels said.

On Thursday, McDaniels graduated from Smokey Hill High School in Aurora. She smiled as she showed off her class ring adding that she can now move her hands, something she wasn’t able to do after her attack. She said she truly believes she will one day walk again.

This story was originally published June 12, 2021, by KMGH in Denver.