STAMFORD, Conn. (AP) — A judge has sealed the criminal case file of a wealthy Connecticut woman who secretly recorded three people, including a child, in a manner involving sexual desire — a move called unusual by open government advocates and defense lawyers.

Hadley Palmer, 53, who lives in a multimillion-dollar, seaside mansion in Greenwich, pleaded guilty Jan. 19 to three counts of voyeurism and risk of injury to a minor — all felonies committed in 2017. 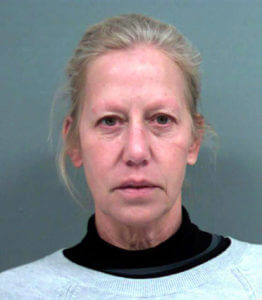 As part of her plea deal, prosecutor Daniel Cummings dropped the two most serious charges — employing a minor in an obscene performance, a Class A felony, and possession of child pornography.

The voyeurism charges against her involved recording someone, naked or in their underwear, without their consent or knowledge, with “intent to arouse or satisfy the sexual desire of such person (defendant) or any other person.”

Many details of the case, however, are sealed away from public view.

Judge John Blawie, in Stamford, ruled Thursday that the case should be sealed, over objections by The Associated Press. The judge said the need to protect several victims’ identities outweighed the public’s right of access to criminal proceedings and documents including details of the allegations.

The ruling came nearly four months after Blawie initially allowed Palmer’s case file to be sealed from public view. On the same day she was arrested on Oct. 25, Palmer appeared in court and Blawie accepted her application for a special probation program. State law requires case files to be sealed when such an application is made, but the original charges against Palmer made her ineligible for the program because they were so serious.

“Having a wholesale sealing of a criminal matter like this is highly unusual and I would argue improper, especially where there are more narrowly tailored means that could exist” to protect the victims’ identities, said Jennifer Nelson, a senior staff attorney with the Reporters Committee for Freedom of the Press.

Palmer declined to comment on her case following a recent court hearing. The daughter of a notable hedge fund founder, Jerrold Fine, she is currently divorcing her venture capitalist husband, Bradley Palmer. She is seen in photos on the internet at fundraising galas and other society events.

Her lawyer, Michael Meehan, did not return messages seeking comment.

Palmer agreed to serve a prison sentence of 90 days to five years, followed by 20 years of probation. Blawie will decide the exact sentence. The convictions also require registration on the state’s sex offender registry. But the plea agreement notes that a judge may seal the registry entry from public view if the judge determines public registration is not needed for public safety and would be likely to reveal the victims’ identities.

On Feb. 4, Palmer began serving 90 days in the state women’s prison, as part of her plea agreement.

The Greenwich police investigation also resulted in the arrest of a child psychologist who was charged with failing to report child abuse or neglect to authorities, as required by state law.

The psychologist’s case file also is sealed. His lawyer did not return messages seeking comment.

Blawie and officials at the state Judicial Branch declined to comment when asked why Blawie allowed Palmer to apply for the accelerated rehabilitation probation program and why documents cannot be redacted like they are in similar cases. Melissa Farley, a court system spokesperson, said it is policy for judges and other judiciary officials to not comment on pending cases.

Blawie sealed the case file Thursday at Palmer’s request. Cummings, the prosecutor, also said the case file should be sealed, because it was not possible to redact the arrest warrant and other documents in a way that would fully protect the victims’ identities.

Palmer also is asking the judge to close portions of her sentencing hearing to the public, including her own testimony — also called unusual by open courts advocates and lawyers.

During the case, the court hearings have been open to the public, including a Feb. 1 hearing on Palmer’s motion to seal the file.

The AP objected to a complete sealing of the case file, saying documents could be redacted and pseudonyms used as in other state court cases involving crimes against children to protect the victims while allowing the public to see how serious the allegations are.

At that hearing, several lawyers for the victims said they supported sealing the case file.

“I’ve never had a case where I’ve moved to seal the file,” she said. “It’s not a practice that you usually see in criminal court. The presumption in all courts, particularly criminal courts, is that the proceedings are open.”

William Fish Jr., a Hartford attorney not involved in the case who specializes in open government and press access issues, said the complete sealing of criminal cases is “almost unheard of.” Add in Palmer’s wealth, Fish said, “And it makes you wonder what’s going on.”

Nearly every week in Connecticut’s courts, people charged with serious crimes against children appear before judges and their case files aren’t sealed. Arrest warrants are generally available to the public, although the names of the victims may be redacted or replaced with pseudonyms.

Last month in Vernon, for example, a man was charged with sexual assault, voyeurism and other crimes after police said he abused his girlfriend’s teenage daughter and secretly recorded her and others in a bathroom. He denies the charges. His case file remained open. The arrest warrant detailing the allegations remained open to public view, with the names of his girlfriend and her daughter replaced with pseudonyms.

Adding to the secrecy in Palmer’s case, before Blawie sealed the file Thursday, Palmer’s name and court case numbers appeared on the criminal case webpages of the state court system’s main website only on the days she was scheduled to be in court, unlike other cases that appear daily on the website in which defendants apply for accelerated rehabilitation. After Blawie’s ruling, her name and case numbers began appearing daily on the site.

Judicial Branch officials declined to comment on why that happened. In general terms, applications for accelerated rehabilitation and certain other diversion programs result in the case files being sealed but the defendants’ names and case numbers remaining on the website, officials said.

Palmer withdrew her application from the probation program on Jan. 14 and immediately filed a motion the same day to seal the file. Blawie allowed the case file to remain sealed pending the required Feb. 1 hearing and his final ruling.