OCALA, Fla. (AP) — A Florida man and woman have each been sentenced to life in prison for killing a woman who was set to testify against them in a drug case. 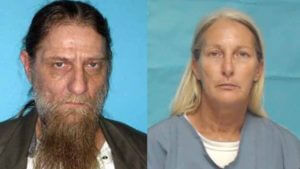 According to trial evidence, Fey and Gunter had been living together in Summerfield, about 50 miles (80 kilometers) northwest of Orlando, where they routinely distributed methamphetamine and other drugs. One of their customers, a 31-year-old woman, had agreed to cooperate with law enforcement and conducted a controlled buy in January 2016, officials said.

Fey and Gunter eventually learned that the woman was helping authorities and gave her syringe containing a lethal amount of fentanyl and methamphetamine in April 2016. After the victim injected herself and collapsed, the couple administered a second dose of the drugs, causing her death, officials said. The couple then drove the victim in her own car to a cemetery several miles away and staged the scene to make it appear like an accidental overdose.