A subpoena had instructed the South Carolina Republican to appear before the special grand jury on Tuesday. 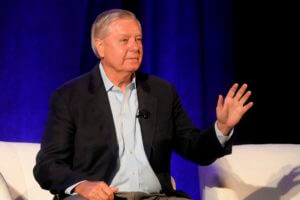 U.S. District Judge Leigh Martin May last Monday denied Graham’s request to quash his subpoena and on Friday rejected his effort to put her decision on hold while he appealed. Graham’s lawyers then appealed to the 11th U.S. Circuit Court of Appeals.

On Sunday, a three-judge panel of the appeals court issued the order temporarily pausing May’s order declining to quash the subpoena. The panel sent the case back to May to decide whether the subpoena should be partially quashed or modified because of protections granted to members of Congress by the U.S. Constitution.

Once May decides that issue, the case will return to the 11th Circuit for further consideration, according to the appeals court order.

Willis opened the investigation early last year, prompted by a Jan. 2, 2021, phone call between Trump and Georgia Secretary of State Brad Raffensperger. During that conversation, Trump suggested Raffensperger could “find” the votes needed to overturn his narrow loss in the state.

Willis and her team have said they want to ask Graham about two phone calls they say he made to Raffensperger and his staff shortly after the 2020 general election. During those calls, Graham asked about “reexamining certain absentee ballots cast in Georgia in order to explore the possibility of a more favorable outcome for former President Donald Trump,” Willis wrote in a petition seeking to compel his testimony.

Graham also “made reference to allegations of widespread voter fraud in the November 2020 election in Georgia, consistent with public statements made by known affiliates of the Trump Campaign,” she wrote.

Republican and Democratic state election officials across the country, courts and even Trump’s attorney general found there was no evidence of voter fraud sufficient to affect the outcome of the election.

During a hearing earlier this month on Graham’s motion to quash his subpoena, Willis’ team said Graham may be able to provide insight into the extent of any coordinated efforts to influence the results of the 2020 general election in Georgia.

The U.S. Constitution’s speech or debate clause protects members of Congress from questioning about official legislative acts. The 11th Circuit court instructed May to determine whether Graham “is entitled to a partial quashal or modification of the subpoena” as a result.

Graham’s attorneys have argued that the calls were made as part of his legislative duties and that provision gives him absolute protection from having to testify in this case.

In her order last week, May noted that the clause doesn’t protect actions that are political rather than legislative. Even if she accepted that the calls were “comprised entirely of legislative factfinding,” and thus protected, “there would still be significant areas of potential testimony related to the grand jury’s investigation on which Senator Graham could be questioned that would in no way fall within the Clause’s protections,” she wrote.