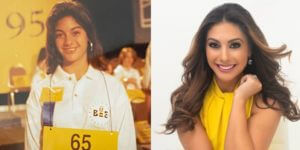 L to R: Julie Grant is pictured as a contestant at the Scripps National Selling Bee in 1995, and at Court TV.

It’s a homecoming of sorts for Grant, Court TV’s midday host, who competed in the Bee in 1995 when she was in the eighth grade. Now she works for Scripps (Court TV’s parent company), which sponsors the Bee.

Veteran color analyst Paul Loeffler serves as an announcer as well. All three are on the ground at the Gaylord National Resort and Convention Center in National Harbor, Maryland where the Bee is currently taking place.

Court TV viewers can expect the same quality play-by-play commentary Grant provides during live trials, with color commentary, explanations and trivia when contestants aren’t standing at the microphone spelling their hearts out.

Grant’s background will certainly be an asset to the Bee’s audience — she’s a lawyer and her Court TV colleagues call her “The Professor” because of her knack for explaining complex legalese and teaching trial advocacy.

The Scripps National Spelling Bee features 234 contestants in total, who range in age from 7 through 15 years old. The winning speller will take home a $50,000 cash prize, a Scripps medal and trophy, a Merriam-Webster reference library, and $400 in reference works from Encyclopedia Britannica. The second-place winner will get $25,000 in cash, and the speller who comes in third place will get $15,000 cash.

The remaining 12 finalists will compete tonight (Thursday June 2) on ION and Bounce TV  at 8/7c. You can also see them live on spellingbee.com/watch. 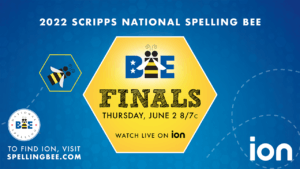