HARTFORD, Conn. (AP) — A federal appeals court on Friday dismissed a challenge to Connecticut’s policy of allowing transgender girls to compete in girls high school sports, rejecting arguments by four cisgender runners who said they were unfairly forced to race against transgender athletes.

A three-judge panel of the 2nd U.S. Circuit Court of Appeals in New York City upheld a lower court judge’s dismissal of a lawsuit challenging the policy. The panel said the four cisgender athletes lacked standing to sue — in part because their claims that they were deprived of wins, state titles and athletic scholarship opportunities were speculative. 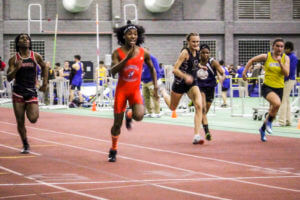 “All four Plaintiffs regularly competed at state track championships as high school athletes, where Plaintiffs had the opportunity to compete for state titles in different events,” the decision said. “And, on numerous occasions, Plaintiffs were indeed “champions,” finishing first in various events, even sometimes when competing against (transgender athletes).”

The judges added, “Plaintiffs simply have not been deprived of a ‘chance to be champions.’”

The Connecticut Interscholastic Athletic Council argued its policy is designed to comply with a state law that requires all high school students be treated according to their gender identity. It also said the policy is in accordance with Title IX, the federal law that allows girls equal educational opportunities, including in athletics.

The American Civil Liberties Union defended the two transgender athletes at the center of the lawsuit — Terry Miller and Andraya Yearwood.

“Today’s ruling is a critical victory for fairness, equality, and inclusion” Joshua Block, a lawyer for the ACLU’s LGBTQ & HIV Project, said in a statement. “This critical victory strikes at the heart of political attacks against transgender youth while helping ensure every young person has the right to play.”

Transgender athletes’ ability to compete in sports is the subject of a continuing national debate. At least 12 Republican-led states have passed laws banning transgender women or girls in sports based on the premise it gives them an unfair competitive advantage.

Transgender rights advocates counter such laws aren’t just about sports, but another way to demean and attack transgender youth.

Christiana Kiefer, a lawyer with the conservative Alliance Defending Freedom who represented the four Connecticut cisgender athletes, said she and other alliance attorneys are considering how to respond, including possibly asking the U.S. Supreme Court to review Friday’s decision.

“Our clients, like all female athletes across the country, deserve fair competition,” Kiefer said in a phone interview. “And that means fair and equal quality of competition, and that just does not happen when you’re forced to compete against biological males in their sports.”

Kiefer added, “The vast majority of the American public recognizes that in order to have fair sports, we have to protect the female category, and I think you’re seeing that trend increasingly with states across the country passing laws to protect women’s sports. … This is certainly not the end of the road in the fight for fairness for female athletes.”

In arguments before a federal judge in Connecticut in February 2021, Roger Brooks, another lawyer for the Alliance Defending Freedom, said Title IX guarantees girls “equal quality” of competition, which he said is denied by having to race people with what he described as inherent physiological advantages.

Brooks said the transgender sprinters improperly won 15 championship races between 2017 and 2020 and cost cisgender girls the opportunity to advance to other races 85 times.

Miller and Yearwood, the transgender sprinters from Bloomfield and Cromwell, respectively, frequently outperformed their cisgender competitors.

The plaintiffs competed directly against them, almost always losing to Miller and usually finishing behind Yearwood. One of the plaintiffs, Chelsea Mitchell of Canton High School, finished third in the 2019 state championship in the girls 55-meter indoor track competition behind Miller and Yearwood.

All the athletes have since graduated from high school.