EL PASO, Texas (AP) — The man accused of killing 22 people and wounding two dozen more at a Walmart in Texas is expected to be reindicted Thursday as he faces another murder charge in the mass shooting that targeted Mexicans, prosecutors said. 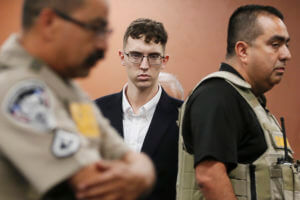 FILE – In the is Oct. 10, 2019 file photo, El Paso Walmart shooting suspect Patrick Crusius pleads not guilty during his arraignment in El Paso, Texas. Crusius, accused of killing 22 people at a Walmart Aug. 3, 2019 in Texas is expected to be reindicted Thursday, June 14, 2020 as he faces another murder charge in the mass shooting that targeted Mexicans, prosecutors said. (Briana Sanchez / El Paso Times via AP, Pool, File)

Patrick Crusius of Allen, Texas, is currently being held without bond on one count of capital murder of multiple people under Texas state law. The 21-year-old has also been charged with several federal hate crimes related to the shooting, according to a 90-count indictment unsealed in February.

District Attorney Jaime Esparza said the latest murder charge will account for 36-year-old Guillermo “Memo” Garcia, who died nine months after the Aug. 3 massacre in the Texas border of El Paso that’s considered one of the deadliest attacks on Latinos in recent U.S. history. Esparza said Crusius will also face more counts in relation to the dozens of people injured in the shooting. The new charges will be added to the indictment prior to the grand jury’s term ending on June 30, Esparza said.

“We’re reindicting the defendant to include the additional death and to include all of those injured in the Walmart shooting in order to give the next DA all of their options,” Esparza added. “We just want to cover all our bases.”

The upcoming reindictment comes more than 10 months after the mass shooting in the majority Latino and Hispanic city federal prosecutors say was sparked by militant racism. They have said Crusius carried out the attack to scare Latinos into leaving the U.S., a plot they allege he outlined in a racist screed published online before the attack.

More than 20 people survived the shooting and suffered from injuries. Some underwent surgery, and one remains in the hospital. Hundreds more have suffered psychological trauma either because they were present or because a loved one was wounded, according to local officials.

Esparza, who’s set to retire after 28 years in office, said he hopes that the added charges will help provide continuity in the case and eventually lead to justice should the DA succeeding him decide to pursue the state case against Crusius.

Voters will pick a new DA in a runoff election on July 14th. It’s one of several factors that will help answer some legal and financial questions, including the trial’s start date and location.

The Department of Justice will prosecute on a parallel track with Texas officials. Crusius already faces the death penalty on a state capital murder charge to which he pleaded not guilty last year.