DENVER (AP) — The Denver suburb of Aurora has agreed to pay $15 million to settle a lawsuit brought by the parents of Elijah McClain, a Black man who died after suburban Denver police stopped him on the street and put him in a neck hold two years ago, the city and family attorneys announced Friday.

A federal magistrate judge accepted terms of the settlement after a mediation session, said Qusair Mohamedbhai, an attorney for McClain’s mother, Sheneen McClain. 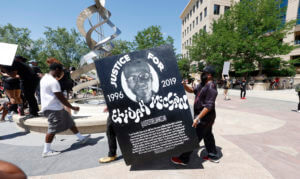 FILE – Demonstrators carry a giant placard during a rally and march over the death of 23-year-old Elijah McClain outside the police department in Aurora, Colo., on June 27, 2020. The Denver suburb of Aurora has agreed to pay $15 million to settle a lawsuit brought by the parents of Elijah McClain, a Black man who died after suburban Denver police stopped him on the street and put him in a neckhold two years ago, a family attorney said Friday, Nov. 19, 2021. (AP Photo/David Zalubowski, File)

Outside court, Sheneen McClain said she was glad to have the agreement finalized but noted the work of fighting for justice for her son just makes her miss him more.

“The money is just the world’s way of saying, ‘We’re sorry,’ but it’s not going to help me heal the hole in my heart,” she said.

The settlement amount was agreed to in July but not officially disclosed until now because of a dispute between McClain’s parents about how the wording of the agreement could impact their dispute over how the money should be divided. Sheneen McClain said Elijah’s father, LaWayne Mosley, was not involved in raising him. How the money will be divided will be addressed separately.

In a statement, Mosley did not address the dispute but said he hoped the settlement would send a message to police.

“I hope Elijah’s legacy is that police will think twice before killing another innocent person,” he said.

Mosley’s lawyer, Mari Newman, said the settlement was the largest ever in Colorado in a civil rights case and only the latest example of a new standard of accountability for police since protests over the killing of George Floyd as well as McClain.

The size of the settlement was emblematic of the harm done to both McClain’s mother and the community, Mohamedbhai said.

The lawsuit alleged the police’s violent treatment of McClain amounted to torture and was part of a pattern of racially biased policing that has involved aggression and violence against Black people. Paramedics also injected him with a powerful sedative.

McClain was a 23-year-old massage therapist who played his violin for cats in a rescue shelter.

His 2019 death and his pleading words to police on body camera footage — “I’m an introvert, and I’m just different” — drew widespread attention after Floyd’s murder in Minneapolis set off global protests last year.

The local prosecutor declined to file charges against the three officers who confronted McClain, partly because an autopsy could not determine exactly how he died. However, a grand jury indicted the officers and two paramedics in September following an investigation by Attorney General Phil Weiser ordered by Gov. Jared Polis.

“No amount of money can change what happened or erase the pain and heartbreak experienced by the family over his loss,” Aurora City Manager Jim Twombly said in a news release. “This tragedy has greatly changed and shaped Aurora.”

Twombly and other city officials called the settlement an important step in restoring community trust, saying McClain’s death has led the city to take a hard look at its policies.

“There is nothing that can rectify the loss of Elijah McClain and the suffering his loved ones have endured,” Aurora Police Chief Vanessa Wilson said in the news release. “I am committed to learning from this tragedy.”

The lawsuit alleged the extreme force officers used against McClain and his struggle to survive it dramatically increased the amount of lactic acid in his system, leading to his death, possibly along with the large dose of the sedative ketamine he was given.

An outside investigation commissioned by the city faulted the police probe into McClain’s arrest for not pressing for answers about how officers treated him. It found there was no evidence justifying officers’ decision to stop McClain, who had been reported as suspicious because he was wearing a ski mask as he walked down the street waving his hands. He had not been accused of breaking any law.

One of the three officers who arrested McClain was fired last year, but not for stopping him. Jason Rosenblatt lost his job for responding “ha ha” to a photo taken by other former officers reenacting the neck hold at a memorial to McClain.

Aurora police have been plagued by other allegations of misconduct against people of color.

Last year, the department came under fire for handcuffing four Black girls who were held face down in a parking lot in a mix-up over a stolen car. Prosecutors said officers committed no crime.

This summer, an officer shown on body camera footage beating a Black man with his gun was charged with assault and resigned. Police Chief Vanessa Wilson, who took over the department last year amid the increased attention on McClain’s death, quickly denounced the officer’s actions, calling it a “very despicable act.”

On Tuesday, Weiser and city officials announced the city had agreed to reforms following a first-of-its-kind civil rights investigation by Weiser’s office that found a pattern of racially biased policing and excessive force.

A monitor who will oversee if Aurora is following the plan and meeting milestones over about five years has yet to be hired.