LOS ANGELES (AP) — A dive boat captain pleaded not guilty Thursday in federal court for a second time to manslaughter in the fiery deaths of 34 people trapped below deck on his burning vessel three years ago off the Southern California coast. 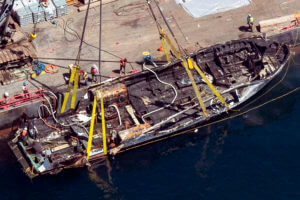 FILE – In this Sept. 12, 2019, file photo, the burned hull of the dive boat Conception is brought to the surface by a salvage team in the Santa Barbara Channel off Santa Cruz Island in Southern California on Sept. 12, 2019.  (Brian van der Brug/Los Angeles Times via AP, File)

A federal grand jury issued a new indictment last month alleging that Captain Jerry Boylan acted with gross negligence aboard the Conception during one of the deadliest maritime disasters in recent U.S. history. A judge threw out the original case on the third anniversary of the Sept. 2, 2019, tragedy.

The trial is scheduled for Dec. 20 in U.S. District Court in Los Angeles.

Boylan faces 10 years in prison if convicted of a single count of misconduct or neglect of a ship officer — a pre-Civil War statute known as “seaman’s manslaughter” that was designed to hold steamboat captains and crew responsible for maritime disasters.

All 33 passengers and a crew member who were trapped in the Conception’s bunk room died.

Boylan, who frantically radioed for help after he and four crew members sleeping above deck awoke to the fire, was the first man overboard and then told his crew to abandon ship rather than fight the fire, the indictment said.

He is accused of failing to train his crew, conduct fire drills and post a roving night watchman on the boat when the fire ignited.

Prosecutors brought the second case against Boylan after U.S. District Judge George Wu in September dismissed the original indictment because it did not mention gross negligence, an element required to prove the crime.

The subsequent indictment alleges Boylan “acted with a wanton or reckless disregard for human life by engaging in misconduct, gross negligence and inattention to his duties.”

Officials blamed the owners of the vessel, Truth Aquatics Inc., for a lack of oversight even though federal safety investigators never found the cause of the fire. The owners, Glen and Dana Fritzler, have not been criminally charged. 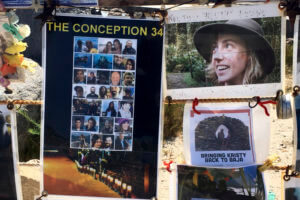 FILE – This July 12, 2020, photo shows a standing memorial to the people who died aboard the Conception dive boat is seen along the coast near the Santa Barbara, Calif., harbor. A federal grand jury has issued a new indictment against a dive boat captain, alleging that he acted with gross negligence when a 2019 fire aboard his vessel led to the deaths of 34 people off the Southern California coast. (AP Photo/John Antczak, File)

Truth Aquatics is seeking to avoid payouts to the families of the victims under a provision in federal maritime law. Family members of the dead have filed claims against the Fritzlers and the company, and have sued the U.S. Coast Guard.

Family members of those who perished at sea showed up for Boylan’s arraignment and said it has been a trying three years seeking accountability.

“It’s been a long journey, a very hard journey. And learning to live with grief is very difficult,” said Susana Solano Rosas, who lost three daughters in the fire. “Today means that hopefully we can see a little bit of justice. … The court is going to move along and try this man, try this captain who allowed our 34 to be killed and burned on that boat.” ___